It could be that you are not actually unlucky, but that you are constantly winding up on the business end of statistics.

This can be illustrated quite well by using the game of backgammon. If you don't know how to play backgammon, please keep reading as I will keep this pretty high-level, but if you would like to learn more about the game, this is a good resource.

I really enjoy backgammon, my dad taught me how to play as a kid and throughout my youth I would play online thanks to the default games package in Windows XP.

As a kid playing backgammon, I always thought that it was mostly a game of chance. My dad taught me a few basic strategies, but it always seemed like you were at the mercy of the dice. The older I got, though, the more I realized that backgammon was a game of many intricate strategies, and through these strategies you can actually control chance.

How is this possible? Well if you are unfamiliar with the game, it basically involves moving checkers to different slots on a board based on the rolling of two dice. The first player to get all their checkers around the board wins. You can also "hit" your opponent's checkers, causing them to go back to the start. To avoid being "hit", you can place more than one checker on a slot.

Based on that description, it seems like a game that relies mostly on luck. But if it were mostly about luck, then how is it that there are world-class backgammon players who compete in backgammon competitions every year and consistently win? A game based "mostly on luck" would provide a novice player the same chance of winning as an advanced player, so obviously there is more to it than luck. 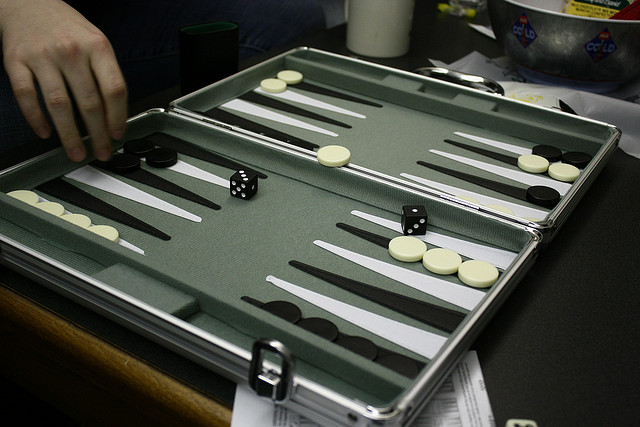 When you dive deeper into the game, you can see that there are moves you can make based on your dice rolls that will offer you the greatest possibility of success. The game is full of non-trival situations where you are forced to make a decision based on an unfavorable roll of the dice. It is in these situations where you have to think about the bigger picture of the game and make a move that gives you the best chance of success. It may only give you the best chance by the thinnest of probabilities, but over the long term of a backgammon match (professional matches usually consist of several games), these little probabilities can add up to your ultimate success.

Note, though, that there is no backgammon strategy that guarantees success, otherwise everyone would do it and it wouldn't be a very fun game. It's all about putting yourself in the best situation and relying on the probabilities to even things out in the long term. You or your opponent may get a lucky roll and win a game, but in the long term it will take more than luck to win consistently.

How this relates to life and success

Life is full of chance. To think that you are in total control would be lying to yourself. There are all sorts of ways for the hand of fate to give you fortune or famine. There are, however, ways that you can improve these odds.

I'm always intrigued by the success stories of people, and one that I find fascinating is that of Harrison Ford. As it turns out, before he was Han Solo (the role that jump-started his career), he was actually a failed actor. He had given acting his shot and played a few small roles, but nothing substantial, so he decided to give up on acting and became a carpenter to support his family. As a carpenter, he worked as a stage-hand for The Doors and did work for some other notable figures, until eventually being introduced by one of them to George Lucas, with whom he developed a connection. Later, when George was working on a little film called Star Wars he got Harrison to come read lines, and liked his style, so he gave him a starring role. The rest is history.

One could look at that story and go "wow, Harrison Ford sure got lucky." He did, but his "luck" was hardly the result of a generous turn of fate. Let's look at the ways that he improved his odds.

He had given up on acting and decided to become a carpenter. Before he gave up on acting, he showed grit by continually trying and succeeding in getting roles in films, no matter how small. In this process, he probably developed connections in the film and entertainment industry that may have helped him.

He became a self-taught carpenter to help his family, because uncredited acting roles probably didn't pay too well. This was a noble and probably wise thing to do, as he was reacting to the fact that the dice rolls weren't going in his favor in the acting world. He was either a skilled carpenter or he levied some of his Hollywood connections, because he worked on carpentry projects for some high-profile clients. Perhaps he purposely tried to get carpentry jobs with Hollywood clients in an effort to keep his dream of acting alive...maybe it was all part of his plan!

He was given an audition with George Lucas to play in American Graffiti, and apparently George liked him as either a person or a carpenter, because he would later get him to do some work on his house. With this connection, Ford was given the chance by Lucas to read lines to actors for Star Wars...he wasn't even auditioning for the role, but apparently he read those lines well enough that Lucas took note.

From the above, you can deduct that Harrison Ford was skilled not only in carpentry and acting, but also in developing connections and relationships with people. He was likable. The odds of him becoming a superstar actor were extremely slim, but you can make the case that he did everything in his power to turn the odds in his favor. Things didn't always go his way, but he hung in there long enough to eventually be victorious.

So was it luck? Sure. Were the odds in his favor? No. Could you follow his same life path and get the same results? Probably not. You can, however, use his story as a good example of doing everything you can to improve your own odds, and knowing when to change your strategy if things don't work out. 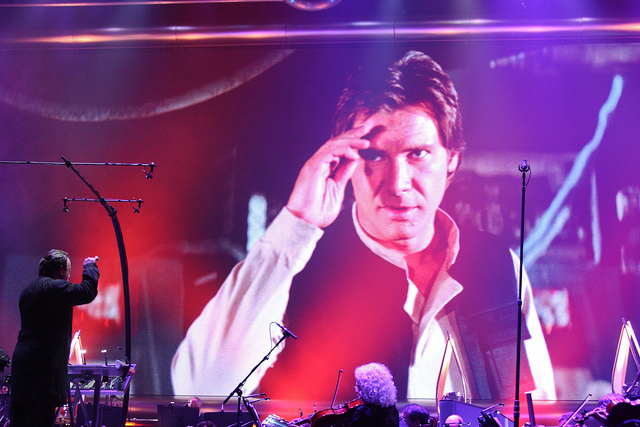 We salute you too, Han Solo
Photo Credit: Sam Howzlt

Putting the Odds in Your Favor

Someone playing against a skilled backgammon player may feel like they have an excess of bad luck. "How is it that my opponent always seems to get good dice rolls and I don't? He must be cheating, or I am just incredibly unlucky!" In reality, the dice rolls of both players fall into a predictable spread based on the likelihood of each roll, the skilled player is just better able to make use of every roll and set themselves up for success.

This phenomenon occurs in pretty much every sport, although instead of a dice roll, the variability of chance is left to the environment. A golfer sinking a 15 foot putt is something of an anomaly. There are so many variables involved in doing so, such as the blades of grass being uneven, the wind, the slope of the green...even a putt hit with the perfect direction and speed won't go in the hole every time due to these uncertainties. A golfer, no matter how skilled, can't expect to sink every putt he hits, but if he practices enough so that he is able to hit his putts with near perfect speed and direction every time, then the effects of the environment will be reduced, and he will see many of his putts drop in.

So we can see that the most straightforward way to improve your odds of success is to simply improve your abilities. Just with the golfing example, improving your abilities does not guarantee success, it merely helps your chances. So everything your parents told you about "if you work hard you will succeed" isn't actually true. They should have said, "if you work hard you can succeed, provided that you work hard enough to increase your chances of success to a sufficient level that the odds of not succeeding are less likely, and you still might have to get a little lucky." That isn't as catchy, though.

Other than improving your abilities, here are some ways I can think of that you can improve your odds of success in many situations:

Remember that Sometimes Success is the Most Likely Outcome

In backgammon, skilled players often make "risky" moves in which they become vulnerable. It's all calculated risk, though, because they know the odds are slim that their vulnerability will be breached.

In the same way, just realize that many times in life people are fearful of outcomes that are statistically very improbable. If you never set foot inside a plane or the ocean then you will never die in a plane crash or from a shark attack, but you could also accept that those risks are small and do those activities anyway.

To be a skilled player in backgammon, you must learn to accept these little risks, because they actually do give you the best odds of winning.

If you don't learn to accept the small, calculated risks of life, then you may not be getting all the joy out of it.