Put simply, a system that utilizes a feedback loop has the output of the system is tied to the input in some way. Whether you know it or not, you utilize a lot of feedback loops in day-to-day life, both in the devices that you use and in your body as well. We basically function by analyzing our environment with our five senses, which feeds the information back into our brain, which then makes decisions based on that input. 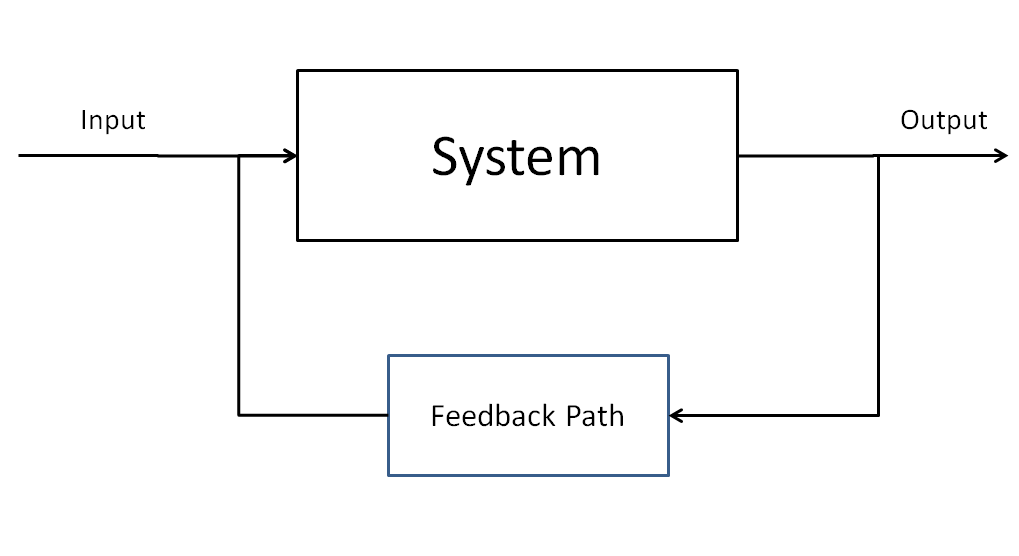 What "negative feedback" means in the context of a control loop is that the feedback path negates changes in the output. An easy way to understand this is to imagine that you are driving a car, or flying a plane, or riding a bike, and are trying to keep it going along a straight path. If the car/bike/plane starts to veer to the right, you will then manipulate the controls so that the car/bike/plane goes to the left, thus negating the output, and keeping the car/bike/plane going straight. A system that utilizes good negative feedback is often known as "stable", as the output will stay constant even if something in the environment changes.

There are a few ways that feedback loops can come up in personal finance. If someone has a "negative feedback" approach to personal finance, then if they come into a sum of money greater than what they normally have, then they will quickly spend it on something, and their life will be relatively unaffected. Likewise, if for some reason they lose money, then they will become more frugal with their spending, and their life will be relatively unaffected. In either case, they adjust their spending patterns so that they always have, more or less, the same amount of money.

Positive feedback scenarios can arise in two different ways, both "towards positive infinity" and "towards negative infinity". For the former case, if someone comes into a sum of money greater than what they normally have, then they will invest it in something that makes them more money, and will invest that in something that makes them more money, etc. Using this approach, their money supply will increase exponentially towards positive infinity. Now, if someone uses positive feedback when they lose money, then the story is different. This can arise if someone loses money (let's say, in the form of debt that accrues interest), and because they lose money they can't pay back debts, which causes the interest to accumulate and the debt to increase, creating a downward spiral of financial ruin.

Ever heard that really loud and high pitched screech that sometimes happens when people talk on microphones? That's caused by the (PA) speaker (which is the output of the audio system) driving the microphone (the input), and positively reinforcing the microphone's inputs, which create an oscillation and a really awful noise. To remedy this, make sure that a speaker output never has a direct path to a microphone, or is far enough away from the microphone so that the sound is attenuated significantly and does not cause the microphone's transducer to activate.

Feedback comes up alot in Electrical Engineering, as electronics frequently utilize positive and negative feedback to achieve certain goals. A phase-locked-loop (PLL) utilizes negative feedback to generate a signal that has an extremely precise frequency and phase output, and is frequently used in all sorts of communication systems. Electrical amplifiers commonly use negative feedback (and sometimes positive feedback) to deliver precise amounts of gain. A struggle of amplifier design arises in trying to prevent positive feedback paths from forming due to parasitic capacitance at high frequencies, which can cause amplifiers to oscillate, which has a tendency to ruin one's day. Of course, if you want to design an oscillator, then you can cleverly implement positive feedback so that an amplifier oscillates at a known frequency, which can be used as a reference clock to other circuits.

Unfortunately, if someone is bad at getting dates, then they won't be able to practice dating, which will cause them to get worse at it, and thus decrease their chances of getting future dates, causing them to spiral into a deep depression and, eventually, die alone.

Now, if someone is good at getting dates, then they will be able to practice dating and get better at it, which will increase their chances of getting future dates (or staying in a relationship with someone they date).

A similar loop arises with sex. According to this article, having sex will make you more attractive and confident. This increase in attractiveness and confidence will, more than likely, allow you to have more sex, and the loop will continue (until you presumably die from sexual overdose). If you are having problems getting laid, then it's likely not going to be good for your confidence, which will make it harder to get laid in the future.

Algorithms used by internet search engines usually work in a positive feedback sort of way. In general, if a website gets a lot of hits, then it will show up earlier in search results, which will increase its exposure and cause more people to visit it, thus further increasing its exposure in search results. Likewise, if a website does not get many hits (like this one), then it won't show up very high in search results, which will not help its chances of getting future hits. This is why search engine optimization (SEO) is such a big part of online marketing.

Well, hopefully you've learned something about feedback systems, and can now use the terms properly in everyday conversation (and correct people when they use them incorrectly!). Just remember that positive feedback = unstable, spiraling out of control in some direction, and negative feedback = stable, constant output regardless of environmental stimuli.

There is also a case known as "meta-stable", in which a system that contains innate positive feedback is (temporarily) in a stable output due to a perfect environment. Imagine a marble balancing perfectly on top of a needle. Meta-stable states can be tricky because on the surface they appear stable and controlled, but if anything shifts in the environment, then they start spiraling out of control.