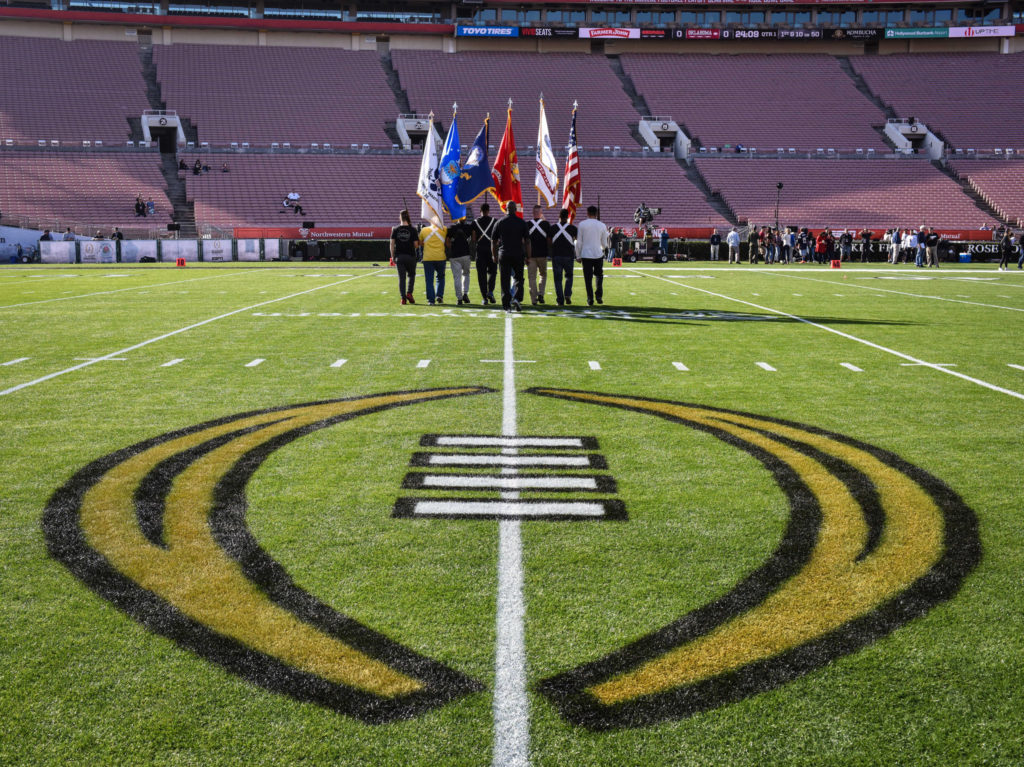 In 2014 the NCAA finally caved to pressures that the championship system for the FBS (formerly known as Division I-A) was inherently unfair. Instead of using a computer algorithm to pick two teams out of over 120 to play in a championship, they decided to choose four teams by committee to compete in a 2-round playoff.

As I've said before, I think the days of the two round playoff are numbered.

In theory the two-round playoff was supposed to solve the issue of having multiple teams qualified for the national championship, since the size of the league prevents a robust means of determining who the true "best" team is (via a round-robin format).

The next logical step in this process is to expand the playoff to three rounds by allowing eight teams to compete. I predict that this will happen in the next few years, and let the record show now that I don't think this is going to stop the complaining.

So then, after a few years of complaining, they would expand it to 16 teams, and then there would probably still be complaining. Where does it end? Should we just make it a 7-round 128 team playoff and let everyone in??

Here's The Solution, And You May or May Not Like It

How do we solve this problem? Well, the short answer is that it's unsolvable. There are simply too many teams in the FBS to have a robust season in a reasonable number of games that definitively determines who the best team is.

That being said, there is a way to it that would, at least in a technical sense, be more robust and more fair than the current system. Here's how it would work... 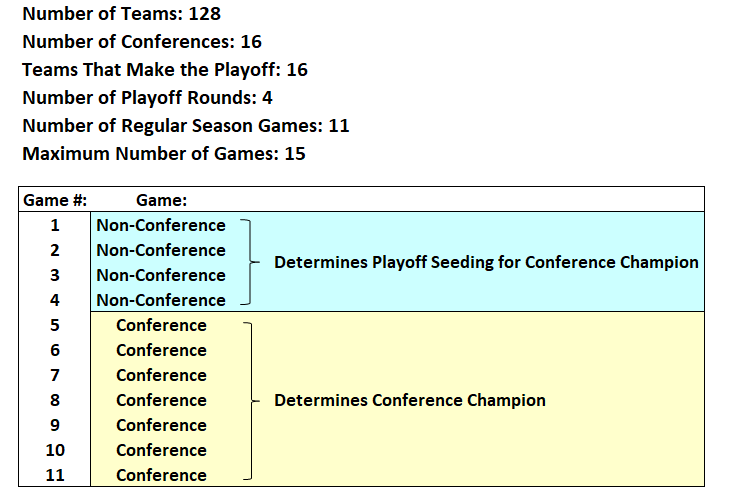 So easy even a UGA fan can understand it!

There are currently 129 teams in the FBS (and a couple more on the way). This is one too many, so whoever the last place team is currently, they're gonna have to go. 128 is the number we want, that's a power of two, and that's important.

The first four out of conference games of the season will be used to determine the seeding of the playoff. In these games, a team is playing to represent their conference. The conference with the best record will see their champion seeded first, which means they will play the last-place conference champion in the first round on the playoff.

This format depends on a 7-game round robin to determine a conference champion in each conference. There is a good chance that teams could tie for first place in the conference, so a tiebreaker must be determined.

If two teams tie, the process is fairly simple: the winner of the head-to-head matchup is the conference champion.

If three or more teams tie, then it gets more complicated. In most conferences currently, the CFP rankings determine the conference champion. In the format I have developed, there won't be a national ranking system (I mean I guess there still could be, but it wouldn't be official in any capacity). There are two reasonable ways that I think could be used to break a 3+ team tie. The first is to pick the team with the better out-of-conference record. This would give some extra weight to the out of conference games. The second is to pick the team with the best average scoring differential for conference games (or perhaps all games).

What If The Conferences Are Uneven?

Definitely the biggest problem college football (or any sport with a large pool of teams) faces is how to group teams evenly. Right now the teams are definitely not grouped evenly, as half of the conferences in the FBS are basically considered "second tier". Even within the power five conferences, there are some pretty big disparities between, say, the SEC West and the ACC Coastal. These disparities *attempt* to be remedied by the almighty national ranking system, but it has been shown time and time again that it's much better to be a good team in a mediocre power-five conference than a great team in a hard power-five conference. Dominant wins against weaker opponents trump quality losses against good opponents.

So what happens if, in my format, there are too many good teams in a single conference? The good news is that if a single conference has a disproportionately large number of excellent teams, the fact that they are in a hard conference would not inhibit them from making the playoff. In fact, if the teams in a conference really are very good, then it helps the conference champion get a good seeding in the playoff. It does, however, create the problem that the best games may be played during the regular season instead of the playoff. This problem can be remedied by a periodic shuffling of teams into different conferences.

Would The New Format Actually Be Better?

From a technical standpoint, the new format would undoubtedly be more fair, in that it would give every team at the beginning of the season a legitimate chance of winning it all.

The question then becomes, would it make the sport better or worse? For all its flaws, college football is still a very exciting and enjoyable sport to watch. In my mind, part of the reason for this is due to its lack of a very robust playoff. While this has its problems, it undoubtedly makes the regular season exciting, because the regular season actually matters. Every game counts, and any loss can potentially put a team out of contention. While this may be inherently unfair for certain teams, it definitely keeps you on your toes throughout the season.

With the 4-round playoff there is more variability, as is the case with any playoff format. More rounds means more chances to lose, and this can potentially mean that at the end of it all, the winning team isn't actually the best, they are just the ones that looked out.

That said, what makes my format unique from several other sports with longer playoff formats is that the regular season still matters a great deal. Any losses during the in-conference round robin stage can potentially put a team out of contention, so it would still be exciting. The only games that might not be exciting are the out-of-conference games at the beginning of the season. But even these could be fun to watch if there are close races for high seeds, and you may find yourself rooting for other teams in your conference as if they were your own.

For now, this system probably represents too massive of a restructuring of the sport to ever catch on, so we'll have to deal with ever increasing playoff rounds that continue to please no one. But that's just how things work...