Growing up with an elementary school physical education teacher for a mother meant that I was forced to play at least one sport a year throughout my childhood.

I wasn't always super thrilled about this since in many cases I was the antithesis of an "athlete", but I still played and had a mostly good time. Like many '90s kids, I played a fair amount of soccer, but also the occasional baseball team and later Tae Kwon Do, Golf, and Tennis. 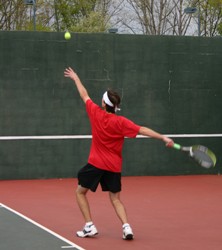 Me playing tennis in high school

Sure, I sometimes thought my mother's rule was a bit stupid, but looking back I'm glad she made me play sports, because sports are kind of great.

There are four main reasons why I think sports are great, and something that everyone should do. Those reasons are exercise, learning new motor patterns, mental toughness, and stress relief.

Sports As a Form of Exercise

One of the primary reasons you should incorporate a sport into your life is because it is basically a fun way to exercise. I don't know about you, but I've never really liked running for the sake of running. Put me on a tennis court, though, and I will dart after balls for hours.

You can only find so much motivation to do things like jog or lift weights for their own sake, so by making games that require physical strength and endurance, we allow the mind to concentrate on the game instead of the exertion. We want to win, so we stop listening to our body when it is telling us that it is tired and wants to stop.

In that same vein, participating in a sport and actively trying to become better at it may give you a newfound vigor to do things like run or lift weights. Once you see how practical having strength and/or endurance is to being better at your sport, you may not shy away from the gym like you used to.

At the very least, sports just help you stay active. They get you standing up and moving around, which is better than sitting at home playing video games.

Sports As a Way to Improve Motor Skills

Every sport that I can think of requires some sort of motor skills in order to be good at it. You're probably going to throw a ball or kick a ball or hit a ball, and doing this properly is sort of the point of the whole thing.

This is good because it exercises your brain when you learn new motor patterns, and your brain needs exercise just as much as your body (and your body gets exercise too, so it's a win-win). I think we need to get over this idea of athletes as "dumb jocks" and start seeing them as people who have a mastery of their kinesthetic mind. Remember that intelligence has multiple forms, it isn't just a matter of how quickly you can do math in your head.

Sports As a Means of Mental Awakening

While most people concern themselves with the physical aspect of sports, there is a large and ultimately important mental aspect as well. Becoming good at a sport requires the consistent practice of the aforementioned motor skills to a point where they become second nature. If someone tells you to throw a ball, you don't want to think about lifting your arm, positioning your feet, turning your shoulders, and releasing the ball at the exact proper moment. Instead, you want to reach the point where you can just pick the ball up and throw it without a second thought.

If, however, you can find that ability to clear your mind and "just do it" (thanks, Nike), then you have unlocked a new level of being that can serve you well on and off the field/court. It could help you the next time you have to give a presentation at work, and instead of being nervous, you just relax your mind and rely on your preparation.

Sports As a Means of Stress Relief

In our 21st Century world, there are certain things we can't really do in most situations without getting into trouble. These are things like yelling, hitting things, beating our chests, etc. Even though these things aren't really "allowed" in civilized settings, they are still a part of our being (probably more so for men than women), and they shouldn't always be repressed.

Fear not, because we still have sports! Sports allow us to release some of these primal energies in an environment that tolerates it a tad more than your office or house. Still, be careful not to yell and hit things too much on the playing field, as you may get kicked out of your league and/or have people dislike you.

Now, some may argue that sports can be as much of a stress creator as a reliever, but the benefit of stresses encountered on the playing field is that they take your mind off whatever stresses may be going on in your life at the time. Most of the time when I am playing tennis I completely forget about any other aspect of my life, all I care about is how I am playing, how my opponent is playing, and how I can win the match. Many times, after I am done playing and the stresses of life are re-introduced into my mind, I accept them a little better than I did before. Once you are physically exhausted from an intense match, other things seem a little less dramatic, and you can look at them more objectively.

How to Choose a Sport

Most people probably have a short list of sports that they know they enjoy, but here are some guidelines I can think of to help you out if you are looking for a new one.

1. Your Age: younger people have much more freedom in choosing a sport due to their younger more nimble bodies and the fact that their school probably has several sports teams, or there are many youth sports leagues in their area. Older people have less freedom when it comes to team sports like soccer, baseball, and American football, but if they look hard enough they can probably find something (whether their bodies can handle it is another story).

2. Your Exercise Wants: Do you want a sport that offers a lot of exercise or just a little? Do you want to be doing a lot of sprinting and juking, or just some light trotting or walking? While most sports feature a good mix of the two, there are some that are certainly more strenuous on your body than others, so keep that in mind. According to this article, squash takes the cake for best workout, but there are certainly many others that will give you plenty of exercise. Golf would probably be low on the list of best cardiovascular workouts, but if you walk a golf course and carry your bag it will still be good for your overall health, and you'll probably be able to do it for the rest of your life.

3. Physical and Financial Access: It's no secret that some sports involve more financial input than others. All it takes to play basketball is a few people, a ball, and a local court (which is probably free if it is a public park). A sport like golf, on the other hand, takes 14 clubs (which can total hundreds to thousands of dollars depending on your choices), many other accessories, and the greens fee at a local course (fees vary from tens of dollars to hundreds if not thousands of dollars, depending on the course). Also take note of your physical access to a sport. If you live in Florida, then cross-country skiing might not be your best choice for something you want to do regularly. If you live in Kansas, you won't be able to surf too often, etc.

4. Availability of People: As you get older, it becomes harder to organize team sports, so that's why many older people enjoy sports like golf, tennis, racquetball, bowling, etc. Golf and bowling can be done solo, while tennis and racquetball need just one other person. Sure, you can probably find some adult basketball, rugby, soccer, baseball, or softball teams, but you will have less freedom when it comes to when and where you play.

5. Level of aggression: Do you want a sport where you can hit people and yell really often, or just a casual exchange? For the former I would recommend any sort of martial art, boxing, or rugby. For the latter, pretty much any "country club" sport will suffice.

I hope this has given you some things to think about, just remember to try to have fun when you play, and be glad you aren't at work!