For the past few months I've been following the Real Men Real Style blog by Antonio Centeno, and I definitely recommend it if you are a man looking to improve your look. Antonio really knows his stuff when it comes to classic men's styles, and he will tell you everything you ever wanted to know and much more when it comes to style rules and guidelines.

In one of his videos, he does a review for men's shirts by 5th and Lamar, a small company out of Austin, Texas. I was intrigued by the review, because the company claims to sell dress and casual wear shirts for slim men, with a tapered waist that prevents skinny guys like me from looking like they are drowning in their shirt. Upon visiting the company's website, I found that their prices were reasonable and the shirts looked pretty good, so I figured what the heck, I'll give them a shot. I also liked how they had both "tuckers" and "un-tuckers," because wearing a regular button-down shirt un-tucked can look goofy if the shirt is long (which it should be if it to be tucked in), so I liked the distinction that they bring to the table.

So I went and bought both a "tucker" and an "un-tucker," here are my thoughts on both. Note that I am in no way affiliated with 5th and Lamar, nor are they endorsing me in any way. I bought the shirts at full price with my own money (well, one was a gift from a family member, but whatever), so you don't have to worry about me being biased at all.

I decided to go with the plain white "Blanco" shirt for this one, because a plain white button down is a must-have for any man's wardrobe, and I also wanted to see how it compared to other plain white shirts offered by retailers such as Banana Republic, Brooks Brothers, and Ralph Lauren. I've found that, even with these "high end" retailers (by American standards, anyway), the plain white shirts are a bit see-through, which worries me when I want to wear them without an undershirt. 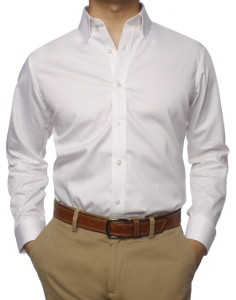 The "Blanco", image from 5th and Lamar

Upon trying the shirt on, I got the immediate feeling that the fit was fantastic, much better than any off the rack shirt from a retail store. The waist was almost perfectly tapered, as if a tailor had done it himself, and the sleeves didn't have any of the bagginess characteristic of shirts from department stores. The sleeves however, are a tad on the short side, and it wasn't until I wore the shirt once and washed it that I noticed the sleeve length was a 32", and the shirt was also offered in a 33". I think the 33" would have been perfect, but it was too late for me to return it, unfortunately. After wearing the shirt a few more times, I actually kind of like the shorter sleeves because, if you read my other post, I enjoy wearing watches, so I like that my watch can peek out from beneath the cuff with ease.

The fabric is also pretty nice, it's still crisp like most dress shirts, and it seems well made, so I think with the proper care it will last a long time. It does not have the "see-through" characteristics I mentioned earlier, so I can wear it without an undershirt and not worry about people seeing my nipples!

While I like the feel and look of the fabric, I must say that it wrinkles pretty easily. On their website, it claims "minimal ironing needed" and I am not so sure about that claim. Granted, I use a steam-press instead of an iron, it is pretty hard to get those wrinkles out, and the shirt tends to wrinkle throughout the day just by doing things like sitting down for extended periods of time. The fabric also seems to be electrically charged in the perfect way for picking up little pieces of lint or hair and making them hard to brush off, so that's not so great either.

I like the shirt (I am wearing it right now in fact), but I don't think it is the best white men's dress shirt that money can buy. That being said, it is currently priced at $48, so pretty reasonable considering that it does not need any extra tailoring. In the future I might see about a colored version and maybe one from their oxford line.

I was pretty intrigued by this line of shirts because never before have I seen a men's button-down that is explicitly designed to be worn un-tucked. I really like this idea because I think that button downs are great for casual wear, but wearing a normal one un-tucked can look bad since they are tapered in way that promotes the shirt being tucked in.

The shirt I went with was the "Cheer Up Charlie - Green and Navy" because I like the green-blue combo.

The "Cheer Up Charlie" image from 5th and Lamar

Just like with the "Tucker", the fit on this shirt is fantastic for me. The sleeves, shoulders, and waist are not baggy at all, so it is really great for my slim features. I also really like the fabric. It is definitely different than the fabric of the "Tucker", it is much softer and lighter, which works really well for the shirt style. It also does not wrinkle like the other shirt, I barely need to steam it at all after air-drying (which I do in hopes of preserving my shirts), so I'm pretty certain that if you threw it in the dryer you wouldn't need to iron it at all. It is very comfortable to wear and I feel both relaxed but also slightly sophisticated wearing it, making it a great way to upgrade your casual look.

Really, my only criticism of this shirt is the price. Currently at $68 (plus an extra $9 for shipping), to me it is a tad pricey for a shirt that is supposed to be for casual wear (I wouldn't wear it to the office). Also, since all the designs are quite colorful and have interesting patterns, the shirt can't really be worn too often without people noticing, so you would have to buy several of them if you are self-conscious about things like that.

I really like the shirt and think I might buy a few more from the same line in the future. If you want to look good when going out with your friends but still want to maintain that casual, laid-back demeanor, then I think you should definitely check out the "un-tuckers", so long as your bank account allows it.

Hope you liked this review, let me know if you have tried other 5th and Lamar shirts and had similar or different experiences.

One thought on “Product Review: 5th and Lamar Men's Button Down Shirts”