Chicken breast is the workhorse of the American kitchen. It's the classic "jack of all trades, master of none" meat. It doesn't get the glamour of steak or the mystic of pork, but it is affordable and goes with many different sides. It is a blank canvas.

The only downside with boneless, skinless, chicken breast is that it is the blandest food on the face of the earth.

The following Brosciencelife video puts the daily struggle rather eloquently:

We've all been there, you're staring down at your rubbery piece of bicycle seat on your paper plate, with your plastic utensils, and your crushed soul, and you think about quitting. But you'd rather kill yourself than lose your gainz! That's why it's called a die-it.

But it isn't just bodybuilders that know the struggle of rubbery, bland, dry chicken. It's an epidemic that all too many people face.

Before we get to how we are going to actually cook this, let's first dive into why chicken is so often cooked extremely poorly.

The main problem with chicken is, unlike steak, chicken has a very narrow range of ideal doneness. Steak tastes pretty good if it is rare, medium rare, or even medium (but please, don't cook it any more than that). Chicken, on the other hand, can only be cooked to one doneness: an internal temperature of 165°F. Any more and it is a rubbery "bicycle seat", any less and it is a bio-hazard.

Since veering to the low end of doneness is potentially unsafe, most people take the conservative route and don't pull their chicken from the pan until it can be used as a punching bag.

The Best Way to Cook Chicken

I used to cook chicken breast by first cutting it up, then throwing it in a pan on medium heat until it looked done. This is quick and efficient, but almost impossible to not overcook.

So it is best to leave the chicken as one whole breast to keep in as much moisture as possible. But this leads to some problems getting it done at the right temperature.

If you cook it in a pan on the stovetop, then you have to pretty much burn the outside to get the inside cooked, or cook it at such a low temperature that the outside never really browns and the chicken just strews in its own juice, which is disgusting.

You can cook it in the oven, but there is still a problem in getting a nice brown crust on the outside.

My answer, then, is one of my favorite cooking methods: the hybrid approach, stovetop to oven.

By starting it out on the stove, you can get a nice brown crust on the outside (and all the flavors that come with it). By finishing it in the oven, the inside will cook over a more gentle, even heat, which increases your window in getting it cooked "just right."

The tool for the job: a cast iron skillet.

Cast iron is simply the best at getting a nice brown crust on the stovetop, and it can be transferred directly into the oven. There is no better tool, in my mind.

Here's What You Do

The chicken should be thawed for this to go smoothly. If you are like me, then you buy chicken in bulk and freeze it. There is nothing wrong with this, but do make sure it is thawed if you want to actually enjoy your meal.

There are many ways to thaw chicken, but it is best to transfer it from your freezer to your fridge about 24 hours before you plan on cooking. If you aren't proactive enough to do that, then put it in a bowl under a gentle stream of cool running water. This is the second-best way to thaw chicken, but it will take 15-30 minutes depending on the size of the breast. DO NOT USE YOUR MICROWAVE TO THAW CHICKEN. Just don't.

If you thawed it in the fridge, take it out and put some kosher salt on both sides, then leave it at room temp for about 30 minutes (don't worry it won't kill you, but to be safe, put some plastic over it). If you thawed it under cool water, you can skip this part. Letting the center get closer to room temperature will allow it to cook more evenly with the outside, and the salt will make a dry brine that will help keep moisture in.

Season it how you like, I usually go with salt, pepper, and paprika. Maybe a little cayenne if I'm feeling dangerous. Be aware that seasonings tend to burn, so don't go too overboard.

Put your cast iron skillet over medium-high heat, and make sure it is nice and hot before putting in the chicken. Preheat your oven to 400°F.

My lubricant of choice: bacon fat.

Yes, I do save the bacon fat every time I cook bacon. It gives things an excellent flavor. Try it, you'll like it.
I guess you could use vegetable oil or something to that effect, but bacon fat is better. Trust me. 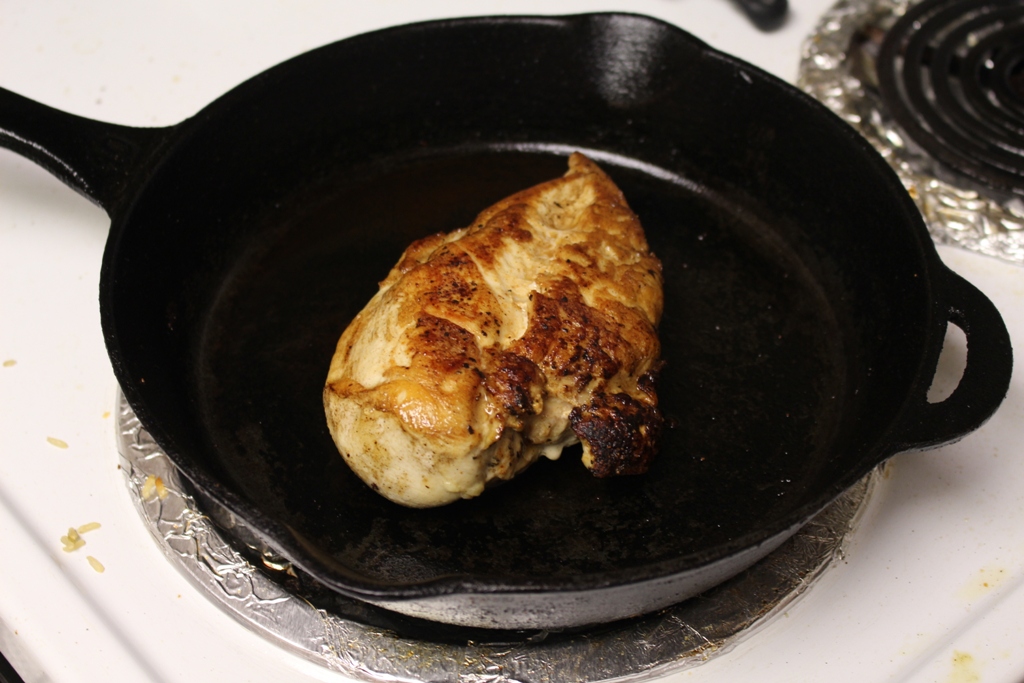 Put the chicken into the hot and lubed pan, and let it go for 1-3 minutes or until there is a nice amount of browning on one side. Don't touch it for at least 1 minute to allow the crust to form.

Once it is done on one side, flip it, let it go for another minute, and then put the pan in the oven. (If you aren't using cast iron, make sure your pan is oven-safe. If not, transfer to baking dish).

Let it go in the oven for 5 minutes. Take it out and poke it. It will probably have a decent amount of give. If so, it isn't done yet. Flip it and let it go for another 5 minutes.

Take it out again. Poke it. If it is firm, but still has a slight give, then it is probably done. If you aren't sure, test it with a meat thermometer, looking for 165°F. DO NOT CUT IT. Doing so will spill all the juices and you will be left with something so dry that no amount of hot sauce in the world will be able to fix. You've been warned.

If it is still pretty soft, then put it in for another 2-3 minutes and test it again. Keep doing this until the chicken is done.

There isn't a set amount of time to cook chicken, since every breast will vary in weight and thickness. Best to learn how to test its doneness yourself.

Once you have determined it is cooked through WITHOUT CUTTING IT, then remove from the pan and let rest on a plate for at least 5 minutes. This allows the juices in the meat to reconvene, giving you a more moist and juicy finished product. 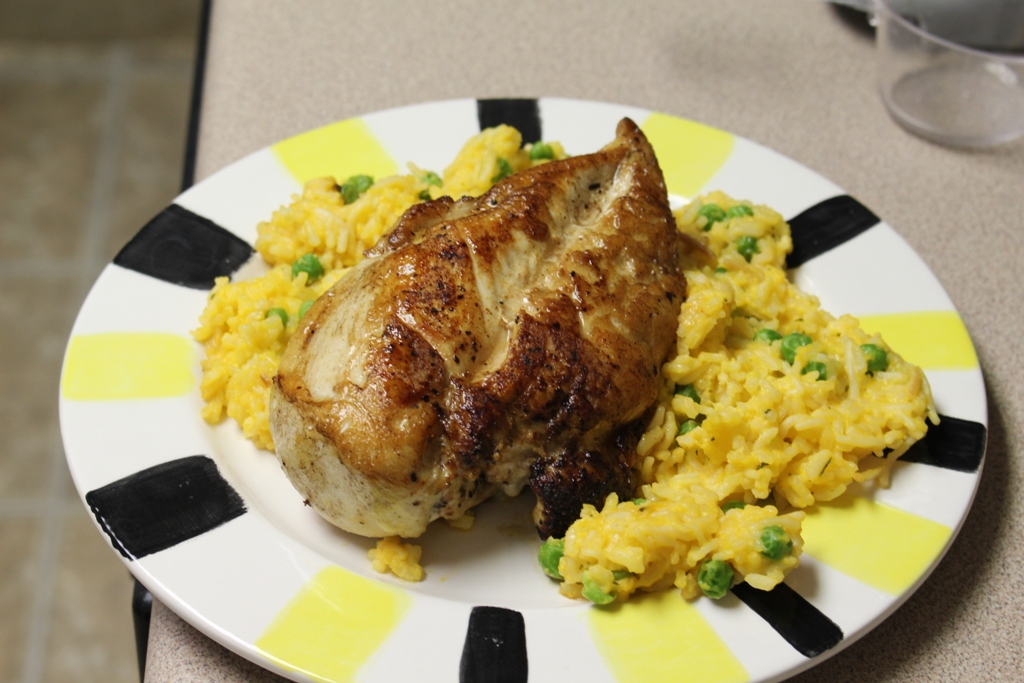 Hopefully you will be able to do this without killing yourself. Serve it with some type of rice and veggies for a complete meal. If you must, put some hot sauce or soy sauce on it for extra flavor.

I won't sit here and promise you that this will be the best chicken you've ever had. That would simply be a delusion. It is, however, a simple and easy way to add some flavor and texture to your weeknight grind.

And it isn't awful.

Ingredients:
Instructions:
Add salt, pepper, and paprika to both sides of chicken and let sit at room temperature for 30 minutes. Preheat oven to 400 degrees, and place a medium sized cast iron skillet (large enough so that all the chicken is not touching) over medium-high heat. Once skillet is hot, add bacon fat and swirl around pan. Add chicken and sear on one side for 1-3 minutes until browned. Flip and sear for 1 minute on the other side. Move pan to 400 degree oven and bake for 5 minutes. Flip chicken and bake 5 minutes more. Remove and test for doneness using finger or thermometer (internal temp of 165F), do not cut! If chicken is still not done, keep baking in 2-3 minute increments until it is. Remove from pan and rest for at least 5 minutes before cutting. Serve with rice and veggies.

One thought on “How to Cook Chicken Breast that Isn't Awful”