In my last article I let everyone know about my negative opinions towards political correctness, and now in this one I am asserting that some commonly used terms are offensive. So what gives? Have I gone soft?

I don't think so, I am more or less alluding to the fact that we have a knack for downplaying the achievements of others without really realizing it.

The concept I will explain does not have to apply only to the terms "genius" and "gifted", it can in fact apply to many other comments that we frequently give, mostly in the form of praises.

So what am I talking about?

To put it simply, when you attribute someone's accomplishments to "genius" or "gifted-ness" or "talent", you are in essence removing their work from the equation. You are basically telling them that they accomplished what they did through sheer genetic luck, and nothing else.

"No I'm not," you are saying. "I am just trying to give someone a compliment." We know you are, but sometimes you have to think about what you are really saying.

Let's consider an example. Say a child does very well on a science fair project, and other children's parents come up to him and praise his work, saying he is so "gifted." Now, the term "gifted" gets thrown around alot in the context of schooling, and it implies that the child has a sort of innate intelligence that is uncommon, and he/she is therefore capable of more than the average mortal child. I'll not deny the existence of true "gifted-ness," I will simply argue that the term gets thrown around more than it should. Maybe that child had no more natural intelligence than any of the other kids, he just wanted it more. He worked harder. Why should all his hard work be attributed to some sort of natural genius? 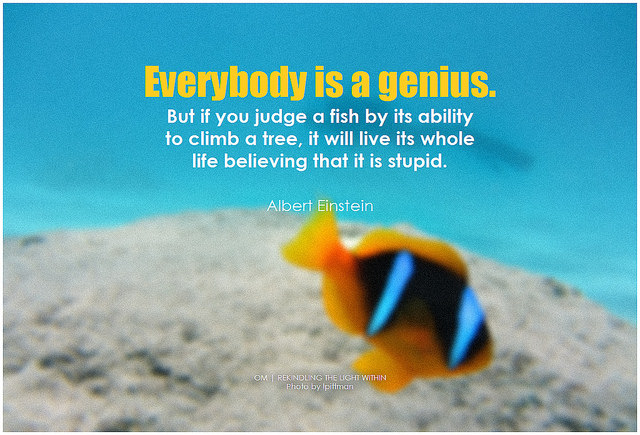 I believe the concept of attributing abilities to genius is dangerous for two reasons: it downplays the effects of hard work, and it makes people feel helpless and unmotivated.

How is this so? I'll give another example, this time from my own life. I can juggle. Whenever I juggle for people, they sometimes say things like "wow, you are so talented. I can't do that." For some reason, juggling is one of those skills that most people think is something that a select few are born knowing how to do, and no one else can. Let me go ahead and tell you this: no one comes out of the womb knowing how to juggle. When people see me juggle, all they see is the end result. They didn't see the countless hours I have spent alone, throwing things up and dropping them. They didn't see all the awkward failures that made it look like I had never thrown a ball in my life. They didn't see that, so in their view of the world it just looks like I have always had this ability. When they try to learn to juggle and don't pick it up within five minutes, they get discouraged and quit, and for the rest of their life they say "I tried it, but I can't do it."

I'll tell you this: it took me about a solid week of practicing for several hours per day (it was the holidays and I was bored) before I could juggle three balls comfortably. I probably dropped the balls about 1,000 times in the process, and each time I picked them up and started over. Don't think that it will take you 5 minutes and you will only drop the balls a few times.

You don't get six-pack abs from one trip to the gym, and you don't learn a new language by scanning through a book. Skills take dedication, they take failure, and they take slow and painful progress. Sure, there are probably some people in the world who are gifted and go on to become leading professionals in their area. They are the ones who have natural talent that they combine with effort. Don't downplay the effort though. Sometimes people rise to success not because they had any natural abilities, but simply because they wanted it more.

The next time you see someone doing something that you wish you could do, don't say "I can't do that," say "I'm too lazy to put forth the effort to be able to do that." There are, of course, some exceptions to this. Someone who is paralyzed from the waist down can't hope to walk again, no matter how much effort they put in. But they can still do a lot of things, and chances are you can, too.

The secret to success is to work really hard and learn as much as you can. We don't like to hear that because it's not easy.

So the next time you want to praise someone's accomplishment, do so by saying "you must have worked so hard."

And if your child isn't in the "gifted" program at school, make sure you let them know that they can still accomplish great things, they just have to work for it.