Like many millennials, I did a semester abroad in college and now think I know everything about travelling.

Of course, on the spectrum of exotic locations for a study abroad, Europe is pretty far  to the "tame" side. I would have gotten more white person cred if I went to South America or Africa, but my college didn't have a satellite campus in those places, and also I'm not that daring.

Throw Australia in there with Western Europe (English Speaking)

Since I "lived" in France for 4 months without knowing any real French, I can tell you a thing or two about how to pull this off as an American without doing too much damage to our foreign relations. I also traveled to England, Ireland, Belgium, The Netherlands, Luxembourg, Germany, Switzerland, Austria, Italy, and the Czech Republic while I was there, so I got pretty accustomed to unfamiliar environments where I didn't know what anyone was saying (except for England and Ireland, where I caught about every other word).

It's All About Communication

We've come so far as a world in pretty much every technological aspect...except communication. National pride and a variety of other factors have caused us to speak in many different tongues, some of which may resemble each other, but none being exactly the same. Sure, I guess there are probably apps now that translate things, but that can only get you so far when you are out in public.

A variety of languages are spoken in Europe (with the average European being at least bilingual, and in many cases trilingual), so English is fairly common (perks of being back-to-back World War Champs). In many countries, the younger people often know English, funnily enough because young Europeans tend to enjoy American television shows, and actually use them as a way to learn English (I met multiple people who used that as a reason).

So, which countries are your best bet for English? Here's my breakdown:

If you're going on vacation, then it's pretty unreasonable to expect you to learn a whole new language (as it turns out, this is pretty difficult). It is, however, handy to know a few phrases. You can look up travel phrases to your heart's content, and that could potentially be useful, but what I've found is that it makes a world of difference to at least say "hello" to someone in their native language.

If you say "hello" and then nicely ask if they speak English, it comes across a lot better than just talking to them in English, expecting them to know it. How would it make you feel if someone in your hometown were to start talking to you in another language?

So, here's how to say "hello" in a few languages (best to listen to them being spoken rather than rely on my phonetic descriptions):

French: Bonjour (bone-joo) (The ending can vary with dialect, but whatever you do, make sure you say a long 'o')

Italian: Bonjourno (bon-jor-no) (Unlike in French, you say a short 'o') (Can also say ciao (chow) for hello or goodbye).

Swiss-German: Grüetzi (groo-et-see) (Switzerland is a melting pot of German, French, and some Italian, but most people speak German and the Swiss-German variant. I never actually used this form of hello when I was there, but I've heard it impresses them if you know it).

Spanish: Hola (oh-la) (most Americans should know this one)

British English: "Hello" is the same, but they usually say "cheers" instead of goodbye or thank-you, which is fun.

A Note on Tone of Voice

Now that you've mastered "hello" in most of the languages spoken in Western Europe, it's a good idea to know what volume you should say them at. It's customary for Americans to be, well, loud...especially when we don't get what we want. Americans also tend to speak slower and louder when they get the feeling that they aren't being understood...which can give the people they are talking to the impression that they are yelling at them.

Now, problems are bound to happen during your European vacation (hopefully not to the degree that Clark Griswold experienced), so I urge you not to raise your voice when speaking to a ticket attendant, train conductor, etc. Europeans, for the most part, appreciate a calm and quiet demeanor more than we do in America, and will help you solve your problem much more readily if they don't feel they are being yelled at.

Presenting Yourself in Europe 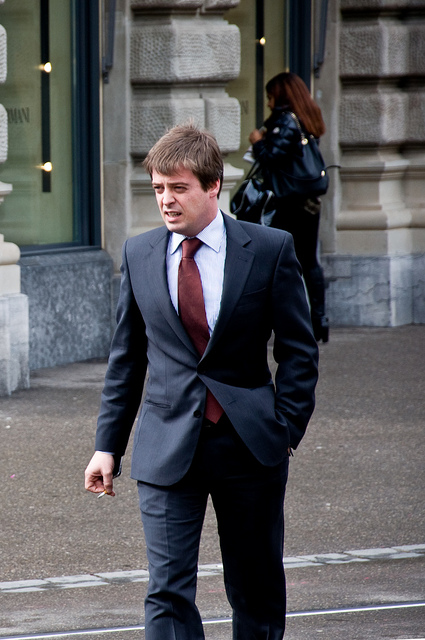 In many ways, how you look and present yourself can communicate more than what you actually say.

During my travels in Europe, one thing became very apparent to me: the average European is much more fashionable than the average American. This is pretty true across the board, but especially so in France and Italy.

The average European is also much thinner than the average American.

Putting these two things together, Europeans typically view all Americans as basically being fat people that wear t-shirts, shorts, tennis shoes, and maybe even a cowboy hat. In short, they think all Americans look like the caricature of a Texan.

With that in mind, if you want to blend in during your travels, it's best to avoid wearing all the things I just mentioned. Why would you want to blend in? Well, depending on the place, people might be nicer to you if they initially think you are a local. The more important reason, though, is that pickpockets tend to target American tourists (American passports are really valuable on the black market), so if you don't look like one then you likely won't be hassled as much.

Here are a few of my style tips for the American abroad (it's also not a bad idea to follow these at home):

-Reconsider the shorts: for whatever reason, shorts have not really caught on in Europe. This could be mainly because Western Europe has a very temperate climate where it does not get blisteringly hot in the summer (for very long at least). With that in mind, if you are visiting Europe in the summer, try to get by with some light chinos instead of shorts. They are still pretty cool, and won't scream "I'm an American tourist" quite as much. If you must go with shorts though (I did...it was hot as hell my first weekend in Paris) then at least make sure they are not too short, not too long, and not too baggy.

-Wear Dark, Fitted Jeans: Wearing lighter-washed, baggy jeans is another giveaway that you are American. Try to keep your jeans (and the rest of your clothes, for that matter) well fitted and not too baggy. I think a dark indigo color is best.

-Don't Wear White Tennis Shoes: I know, it's hard because you are going to be doing a lot of walking and they are comfortable. But wearing white tennis shoes, besides being an eyesore, really screams that you are American. I feel like a brown double monk strap shoe is a very "European" choice, but if you don't want to wear a dress shoe then I would recommend maybe a chukka boot or "fashion sneaker."

-Don't Wear Branded T-Shirts: Jeff Foxworthy said it best, "You give me a redneck man's t-shirt drawer, I can tell you what kind of truck he drives, what radio station he listens to, who he roots for in NASCAR, what he likes to hunt, who his favorite college football team is, his philosophy on life, and where he went on vacation the last twenty-one summers."
It's best to leave all these t-shirts at home. Also, you may have an urge to display your national pride with a nice American flag shirt. What you must understand is that there is a time and a place for American flag shirts: the time is the Fourth of July and the place is an outdoor picnic of some kind.

-Wear Neutral Colors:  For whatever reason, Europeans don't wear a lot of hot pinks, lime greens, etc. Stick with blacks, whites, greys, light blues, etc. and you should be fine.

With all that being said, if you follow my advice but are always snapping pictures of everything and have a general confused look about you, then you will probably still look like a tourist. It's okay, life goes on.

On the flip side, I broke most of those rules during my travels, and several people still mistook me for a local, so maybe all you need to do is be thin and quiet.

A Note on French Travel

So, many Americans have this idea that French people are a-holes that don't like Americans. This isn't really true.

What many Americans might have experienced is a trip to France that involved a French person being short with them or not bending over backwards to help them. There are a few factors that go into this.

One, if you only spent time in Paris, just remember that Paris is a big city like New York. People are busy, have jobs, lives, etc., so you'll have to forgive them for not going out of their way to make sure you have a good vacation. Another thing is that Paris gets the 2nd most American tourists of any European city, behind London, which makes it the #1 non-English speaking city. This means that Parisians have to deal with American tourists regularly, and many are loud, obnoxious, and poorly dressed, as I mentioned earlier.

Unlike more tropical destinations that Americans might vacation to, Paris is a city with a multitude of commerce, so it does not rely on tourism by any means. This means that many people do not have to bend over backwards for you solely because you are a tourist and they want you to come back.

Lastly, don't make any comments to French people about us "saving their ass" in World War II. They know, they appreciate it, and they would like to get on with their lives now. Just remember that France had our back during the American Revolution, so without them we wouldn't even be a country.

On a side note, French people don't "hate" Americans. They don't like our politics most of the time and probably think that a lot of us are not extremely intelligent, but they don't "hate" us. Most of them are quite fond of our music, movies, and TV shows.

Europe is a continent with a lot to offer in terms of history, culture, scenery, and overall good times, so I encourage you to make the trip across the pond sometime. When you do, be sure to be aware of how you look, what you say, and what you do, because the world has never been smaller and we as Americans have a lot to gain from good foreign relations. Just always remember to be nice to people, and they will likely be nice to you.

And don't do a Hitler salute in Germany. Don't do it as a joke...just don't do it.

If you have any fun travel stories or tips, post them in the comments.

To Europeans reading this: anything I got wrong?

2 thoughts on “An American's Guide to European Travel Part I: Communication”