At the close of Rush's most recent album Clockwork Angels is a little gem called "The Garden."

If you haven't heard it, I would recommend giving it a listen. I find it very soothing:

And if you aren't a huge Rush fan, don't stop reading! I'll sum it up for you.

The lyrics are a tad cryptic by themselves, but the song (and pretty much every other song on the album) takes on new meaning when you read the accompanying book Clockwork Angels by Kevin J. Anderson.

I thought the book was great and loved the idea of making a concept album and combining it with a novel, it is one of the many reasons why I am a huge Rush fan.

The plot is a more or less typical "hero's journey." It follows the adventures of Owen Hardy, who decides to leave his home on a whim and travels to distant lands, meeting strange people and undergoing substantial personal growth along the way. At the end of all his adventures, he decides to settle down and "tend his garden", which he does both literally and figuratively in the sense that he cares for his family.

I don't really feel like diving into this song and analyzing every line, but I think the real importance of it can be found in the chorus line:

The measure of a life is a measure of love and respect,
So hard to earn so easily burned

In the fullness of time,
A garden to nurture and protect
(It's a measure of a life)

In the book, there is another phrase that accompanies the "measure of a life" statement. It says "The treasure of a life is a measure of love and respect...Love without respect can be as cold as pity; respect without love can be as grim as fear."

That one line brought so many things to light for me. It pretty much sums up the fundamental struggle inside every man: the struggle between the masculine and feminine energies, yin and yang, etc.

You'll often hear that men are pre-disposed towards aggression. Our natural urge is to yell and scream and fight whenever something doesn't go our way. Because we live in the 21st century and must adhere to societal norms, we are forced to restrain these aggressive tendencies. It then just becomes a question of "how much?" If we restrain our aggressiveness too much, we are seen as weak, submissive, unassertive, etc. Life becomes a balancing act, and teetering too far to one side can bring ramifications.

I'll admit, I have found myself caught in the dreaded "friend zone" on more than one occasion. I'm sure many of you have as well, and it isn't fun at all.

Now, when many people find themselves in the friend zone (after the initial denial phase where you still think the other person likes you) their first thought is anger, usually directed at the other person. They think "how can they not like me?! I am such a good catch!"

That may very well be true, but the fact of the matter is that you being in the friend zone is more than likely your own fault. Just remember, the measure of a life is a measure of love AND respect. Most of the time when guys find themselves in the friend zone, it is because they weren't assertive enough at the right times (or in the right way).

So, if you miss out on that crucial second part, then you end up with a girl who likes you, maybe even loves you, but she doesn't respect you, and love without respect is pity. You don't want a girl to pity you, because if she does, you're gonna have a bad time.

Now on the other end of the spectrum are the pick-up artists. These are the guys that are good at displaying their dominance, but probably not so good at showing compassion (or, genuine compassion). Girls are initially attracted to these guys, but will more than likely not want to pursue a long term relationship with them. They respect these men, but do not love them, and respect without love is fear (which, in extreme cases, can lead to domestic violence and other bad things).

The actual act of staying out of the friend zone is a difficult proposition. If you want to know more about it then I strongly recommend The Ladder Theory, it's an excellent analysis of the phenomenon. In my own experience, appearing completely uninterested in girls can sometimes have the effect of making them extremely attracted to you, but this is hard to pull off if you actually like the girl.

The friend zone is definitely something you don't want to get trapped in, but sometimes it is inevitable. Bad first impressions, awkward moments, poor timing, and a variety of other factors can lead to a one way ticket to friend zone hell. And that is a one way ticket, don't try to get out of it. Just move on.

Another important takeaway of "The Garden" is that of a man's legacy. In the novel, the main character decides to put a stop to his wild adventures and world travel, and settles down. This thought sounds frightening to many younger people (and some older people). "Settling down", "selling out" and other related terms are often thought as being synonymous with "giving up."

I think the book made it pretty clear that this is not "giving up." Owen Hardy, after going on many adventures (many of which weren't as fun as he expected), decided that he didn't want to live that life any more. He wanted to settle down, care for his family, and tend his garden.

In our current world there is an obsession with being spontaneous, bold, daring, etc. We love reading about people who followed their dreams and succeeded. No one wants to hear about someone who lived a cool life and then decided to go grow tomato plants, and no one wants to grow up. But this is reality, it's not always better to live a life of excitement and adventure. Sure, it can be fun for a time, but eventually it will get old.

Now, this does bring in an important point: sometimes you should go on that adventure. I, for one, think that settling down too early will leave you with a life of indecisive regret, always asking the "what if" questions. Now, sometimes it is comforting to always have those questions in your head, because there is a certain disappointment to discovering that things you always thought would be awesome turned out to be lame. To me, though, part of growing up is finding out for yourself if things are really all they are cracked up to be, and if they aren't, then you'll know for sure.

As for me, I think I've got a few more adventures left in the tank, but one day I will be fully content with having a house in a quiet neighborhood, and maybe a little garden in the backyard. 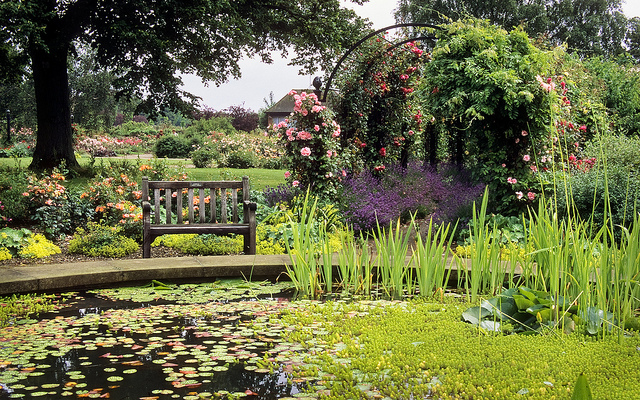 This garden wouldn't be too bad
Photo credit: ukgardenphotos