When you really look at it, the fact that gyms exist really shows how we have progressed technologically as a society, but regressed physically. If we were able to get sufficient exercise in our daily lives, then we wouldn't need gyms.

But we don't get sufficient exercise (well, many of us don't, myself included), so we do, in fact, need a way to work out our bodies, and gyms are a pretty decent option.

Be careful, though, as to which gym you choose, as many will not help you achieve the results you want.

I'll start off by picking on Planet Fitness. They are a national chain with many convenient locations and offer really good rates. For a mere $10 per month, you can go into one of their gyms and play around on various machines, treadmills, and...well that's about it. Their mission statement is that they are a "judgement free zone", as they don't care what you look like, how much you can lift, whether or not you can see your feet while standing up, etc. They just want you to feel good about yourself and give it everything you've got!

Sounds nice, but beware. Their "judgement free zone", where everyone gets together and sings Kumbaya, hides the fact that they do, in fact, judge some people...quite harshly. These people in question are "lunk-heads", a term they use for basically anyone who is in good shape.

This massive irony was hilariously pointed out in a mockumentary video (sorry that it's backwards):

I think my favorite part of the video was when the host says to the gym manager "But it IS a gym...right?", after she says that things like grunting are not allowed at Planet Fitness.

If you are a hardcore bodybuilder/powerlifter/weightlifter/strongman, then you're gonna have a hard time at Planet Fitness. This isn't really much of a problem for these guys/gals, though, since Planet Fitness doesn't really have anything that they could use, therefore they would never want to work out there. Planet Fitness only has machines, cardio equipment, and light dumbbells. They are missing the one piece of equipment that, in my opinion, every gym needs: barbells. 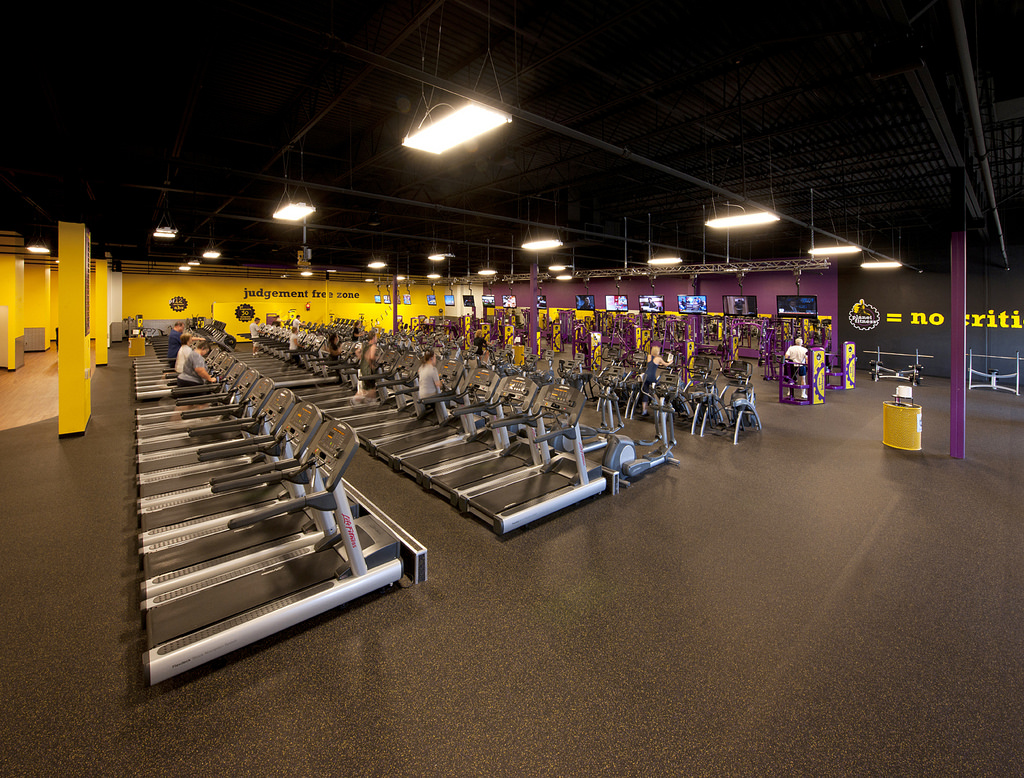 Life is like running on a treadmill, you sweat a lot and ultimately go nowhere
Image Credit

I've written before about my experience and results with barbell training. Granted, my results were not as good as some, but they were results nonetheless. Barbell training is the only thing I've ever been able to stick with, and that's really the key in my opinion.

If you really set your mind to it, then yes, you could get some decent results at Planet FItness on a bodybuilding-style program. But you'll never get strong by doing machine/dumbbell exercises. To get strong requires that you lift heavy things. There are no heavy things to lift at Planet Fitness.

Planet Fitness is basically a gym that, in order to make out-of-shape people feel welcome, actively prevents in-shape people from getting stronger. Let that sink in a little bit. It's a gym, where people presumably go in order to become stronger/fitter, that discourages people from being strong and/or fit. To top it off, they even have pizza in the gym on occasion.

I'm picking on Planet Fitness a lot, but they aren't alone. They are probably the most extreme example of "pussification" (a term coined by George Carlin to describe how American men are becoming increasingly soft), but certainly not the only one. The average commercial gym in America is not too much different than Planet Fitness. They may not have the "lunk alarm" or grunting rules, but probably the general lack of barbells and squat racks and abundance of machines and treadmills.

There are several practical reasons for this. The first is that the average gym-goer doesn't know how to properly perform barbell exercises, and rather than hire knowledgeable staff that teach patrons correct form, it's easier (cheaper) for a gym to hire a few people at minimum wage to show you how to set up the machines correctly. It's hard to hurt yourself on a machine (in the short term), so it also works well for liability. The more sinister reason for having an abundance of machines is that gyms know that they won't give any sustainable results. Gyms make money on memberships, and once they have you committed to a 1+ year membership, they don't care whether you come to the gym and get results or not. In fact, if fewer people actually go to the gym, they can give out more memberships without the gym becoming overcrowded.

From a capitalistic standpoint, you would think that if someone bought a gym membership and didn't get any results from said gym, they wouldn't renew their membership, right? Well, in a surprising twist from the typical American mindset of "it's everyone's fault but mine," people actually blame themselves when it comes to lack of workout progress. How can it be the gym's fault if I didn't go?

I've spent awhile picking on Planet Fitness and other such gyms, so now it's your turn, CrossFit.

CrossFit first started in 1995 in Santa Cruz, CA as sort of an anti-commercial gym. While other gyms were dumbing-down their facilities, CrossFit went the other way and created a gym that featured no machines and only free weights, with an emphasis on intense cardiovascular training and Olympic Weightlifting.

It exploded in popularity between 2005 and 2010. After this time frame, chances are you started to hear at least a few people who proclaimed that CrossFit was the one and only Son of God and anything else was a waste of time.

It was also probably around this time when you started hearing about CrossFit-related injuries. Because of its "give it everything you've got and more" approach to every workout, it's no surprise that CrossFit lends itself to a variety of overuse injuries. That, and the fact that you only need to pass a test and go to a weekend-long course in order to become a Level 1 CrossFit instructor. That might not seem like too big of a deal, but in CrossFit they do Olympic Lifts, and proper instruction and training is essential in order to do Olympic Lifts without hurting yourself or others. They aren't something you can pick up (and be qualified to coach, no less) in a single weekend.

In my opinion, CrossFit had the right idea at the beginning: to be a gym that promotes functional strength and explosive exercises. In practice, though, they overdid it. If you are already an established athlete who is proficient in squats, deadlifts, power cleans, etc., and are looking for a challenge, then CrossFit may be for you. If, however, you are an average Joe looking to get more fit with little to no experience in basic weight training, then I would not recommend CrossFit. The group and competitive nature of the workouts pressures you to keep going even when your body is telling you to stop. Listen to your body, and live to fight another day.

On the far left (in Socialist territory), you have a group that basically does not appreciate the success of some, and wants to actively prevent them from having such success while, at the same time, preventing those without success from ever hoping to achieve it. Sound familiar? Yes, I am basically saying that Planet Fitness is a socialist conspiracy. It looks nice on the outside, preaches to not judge others (unless you are in-shape/successful), and will ultimately fail even though people think it's working. It may prevent you from hurting yourself, but the lack of risk also prevents you from achieving any type of substantial reward. The only winners at Planet Fitness are those who own the gym, and in socialism, the only winners are those who run the government.

On the other side, you have a group that goes to extreme and sometimes violent measures in order to "win". On the far right in America, you have people arming themselves to the teeth, believing that Obama is out to get them and they must "defend what's theirs." It's not a perfect metaphor, but it's similar to how CrossFit promotes "doing whatever it takes" to finish a workout. In CrossFit, if you aren't successful, you might get hurt, and in an ultra-conservative view of capitalism, only the strongest will survive, and others will be left "financially hurt."

I'm not a fan of either side, and think that somewhere in the middle lies what's best for both your workout routine and your country. Unfortunately, the current political landscape leaves you little choice other than picking a side. Thanks to partisan politics, you must either vote red or blue, as anything else doesn't really matter. Because of this, each side keep inching progressively further out with every election. A Republican candidate dare not be pro-abortion, and a Democratic candidate dare not be pro-gun. This forcible belief system rubs off on the voters as well, resulting in a country divided and a people who don't think freely.

My solution? Well for the gym it's easy, just find one (or make your own) that gives you the tools to be fitter and also pushes you to do so (but not too hard). For a country it's a lot harder. I wish I could just pick a leader that I want and see how that goes, but we can't really do that. An entire nation has to decide on leaders, and groupthink will inevitably ensue.

The problem with democracy (granted, the USA isn't a pure democracy, we still have that whole electoral college thing) is that it assumes a large number of people will ultimately decide on the right thing. I had a professor in college who would pose questions to the class and have us vote on the answers. Sometimes most of the class would get it right, other times it was fairly split, with perhaps one more vote to a side than the other (similar to most elections). Whenever that happened, he would exclaim "well, it's democratically obvious that the answer is [whatever answer had one more vote than the other]." Most of the time, that answer turned out to be wrong.

Unfortunately, I think ole Winston is right, democracy is not perfect, but it seems to be the best we've got.

Think for yourself, keep your mind open to other views, and educate yourself in order to determine if other views are worth listening to. If everyone did that, then democracy might just work...

One thought on “Planet Fitness or CrossFit? Gyms and Political Polarity in America”