Perhaps nothing solidifies your status as a lower middle class American quite like being a connoisseur of chain restaurants. They have something of a reputation for mediocre-quality food that is lacking in imagination in an overstimulating environment that represents decades of market research and corporate optimization.

But, you know, they aren't all that bad. I, for one, actually like many chain restaurants. They serve a few different purposes for me: the first being a decent source of tasty food at a fair price, the second being a quick way to alienate myself from any hipsters who want to be my friend (unless hipsters start frequenting chain restaurants because they are so obviously mainstream that a casual hipster would never set foot in one, thereby making them not mainstream...). 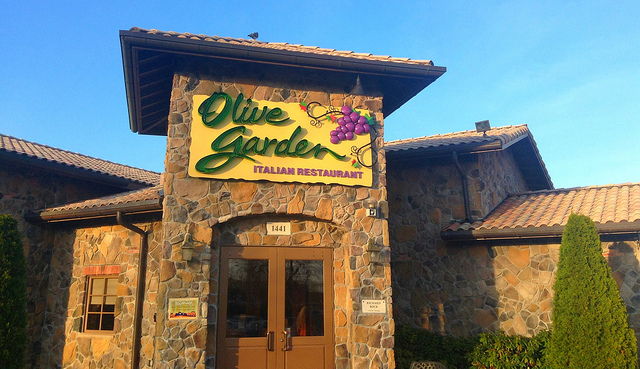 Here's a fun thing to do at parties to break the ice: when someone asks you what your favorite type of food is, say "Italian." When someone asks you what your favorite Italian restaurant is, say "Olive Garden". Sit back and watch them silently judge you as they frantically try to think of a response that is not too offensive but still condescending enough to let you know that you are not on an even playing field with them. And don't say "Olive Garden" with a very self-aware tone that screams "I know it's a dumb chain restaurant, but I like it anyway." No. Say it with a super serious straight face; really own it.

I grew up in a relatively small town that didn't have an Olive Garden until I was into my adolescent years, so it was pretty exotic for me as a kid. And let's be honest here, their salad and breadsticks are friggin amazing. Their entrees are okay I guess, but by the time my chicken parm arrives at the table I'm already about 5 breadsticks in, so the main course is really just a formality at that point.

Pro tip: the secret to the salad is to offer to serve the rest of the table first. They will think you are being selfless, but the real reason is that all the dressing sinks to the bottom, so by going last you are guaranteeing yourself the leaves with the best lubrication. That's what I call a win-win. 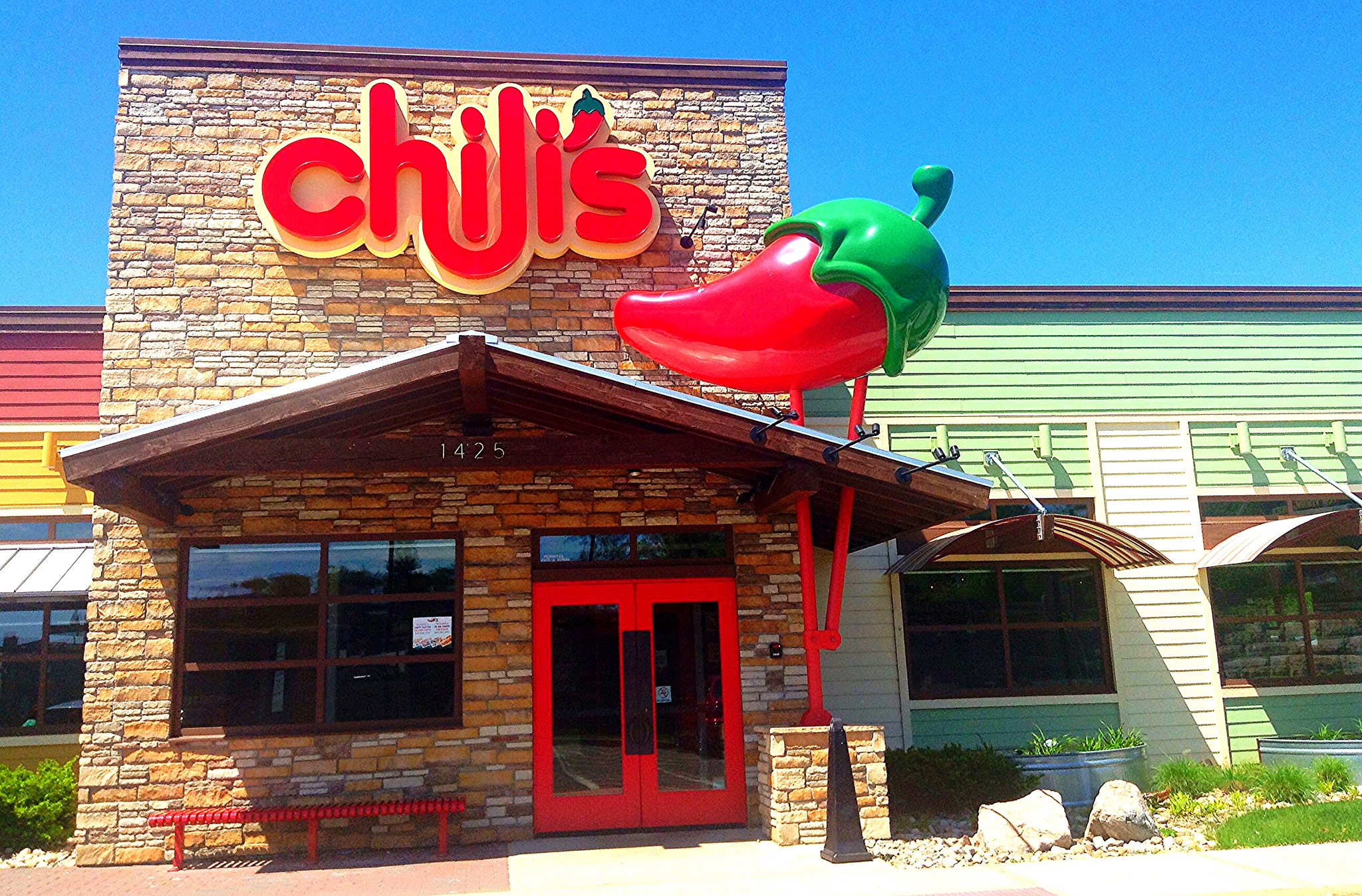 Something I never considered about Chili's is that the full title is "Chili's Bar and Grill", and since there is an apostrophe before the 's' it implies that the Chili is in possession of the bar and grill...adding a sort of personification to the Chili that had never dawned on me until writing this article.

In any case, it's a pretty solid restaurant with a nice variety of southwestern themed offerings. It would have been higher on my list, but when they re-branded a few years ago they took away my favorite menu item: the fajita pita. It was basically seared fajita steak stuffed into a warm pita with grilled onions, peppers, and a smokey chipotle sauce served with a side of fries...for $7. So, if the market research people for Chili's got lost on the internet and stumbled upon this article, all I have to ask is "what the hell? Why did you take the fajita pita away from me? Why?! Whyyyyyyyy?????!!!!!"

Their huge brownie dessert with the hot fudge and ice cream is also pretty amazing.

For most of my youth, a trip to Cracker Barrel only occurred when the family and I were en route to a strange and distant land, most often the beach. To this day whenever I go to a Cracker Barrel it is usually on a road trip somewhere, so the dining experience is laced with a sense of adventure. Even when we finally got one in our hometown, we found that we didn't go to it all that often, because going to a Cracker Barrel when you aren't on a road trip just feels...wrong. 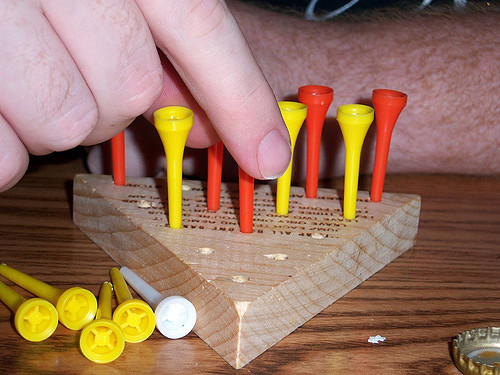 I'm a boss at this game
Image Credit

I've gotten a variety of different things there over the years, but I'm partial to the chicken and dumplings with fried okra and green beans. When they ask if you want biscuits or cornbread, the correct answer is "both".

The general store with a variety of old timey doo dads and trinkets offers some entertainment while you wait on a table (because there is always a wait).

If there ever was a time to celebrate a joyous occasion or just have a fun Saturday night out on the town, my parents would suggest that we go some place special, some place real nice: Outback!

Outback Steakhouse had two things that my childhood self was quite fond of: an endless supply of delicious bread and some darn tasty mac n' cheese. At some point, I got older and started ordering a steak there, and their steaks are pretty good too, I guess, but every now and then I decide to take a walk down memory lane and get the mac n' cheese. I think you can get it as a side if you ask, or just be a man and confidently tell the cute waitress that you would like an adult-sized portion of the kid's mac n' cheese. 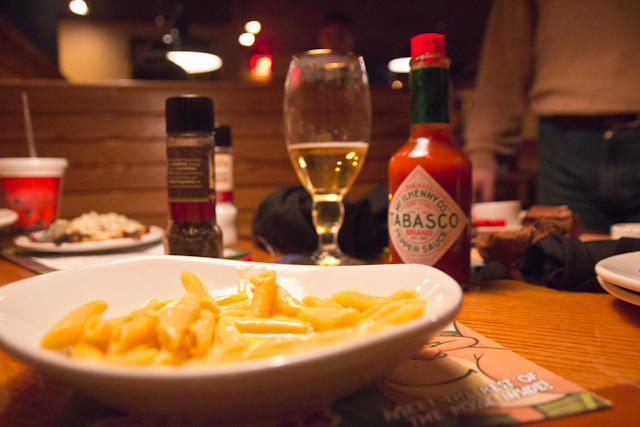 They serve it with a spoon, but you gotta fork that shit.
Image Credit

Does Red Lobster have the best seafood in the world? Probably not. Do they have the best free bread of any restaurant ever? You better believe it. 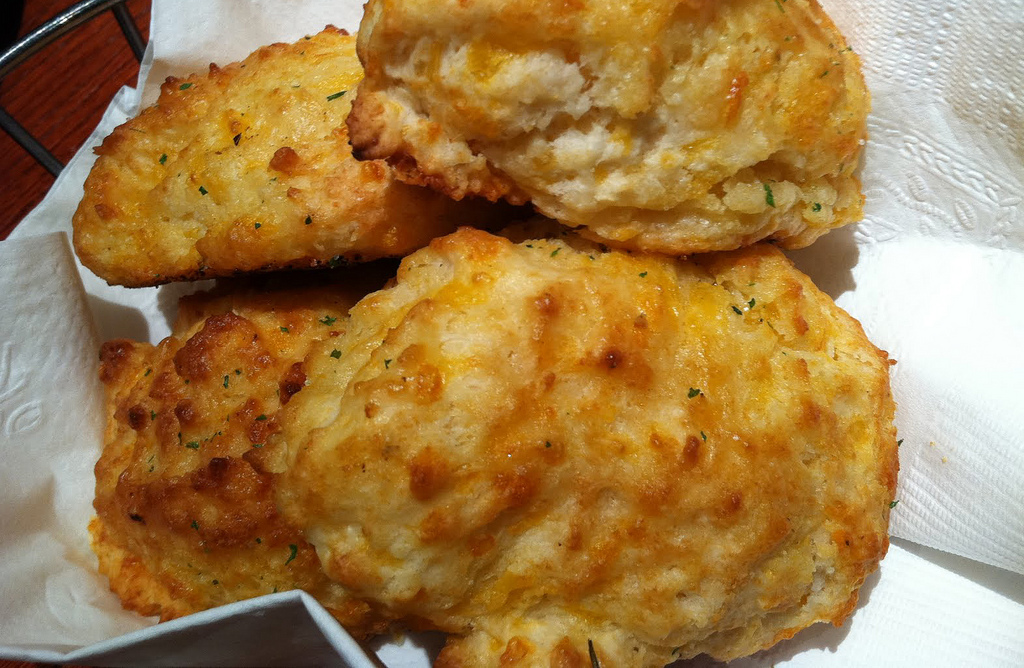 You can almost taste the butter from here.
Image Credit

Here's how it goes down: you eat one biscuit in about 10 seconds, say "mmm, that was good, but I better not eat any more so I have room for my entree". 30 seconds pass. You eat another one. You think, "okay, that was still good, but I better stop now." A minute passes and you have your third. Depending on how many people are at the table, the basket is very nearly empty at this point. The waitress comes by and asks if you want more biscuits. You make a hesitant glance towards the other people at the table. Of course you want more, but you don't want to be labeled as the fatass that asked for more biscuits, so you hang low, anticipating that someone else will carry the torch. A silence washes over the table as each person locks eyes with everyone else in the game of biscuit chicken. You start to make statistical calculations of how long before your food shows up. It could be 5 minutes, but it could be an hour! What if you have to sit at the table biscuitless for an hour?! YOU CAN'T TAKE THAT CHANCE! So you break down and cry to the waitress "yes! yes I want more biscuits!" And you bury your head in your hands, unable to look at the rest of the table. Everyone else takes a moment of silence, quietly thanking you for your brave sacrifice. The new basket of biscuits will inevitably come at the same time as your entree, and you eat it all, because you're an American.

One thought on “My Top 5 Chain Restaurants”