I started playing tennis at the ripe age of 16, which was actually too old if I wanted any hope of being good at the sport (most of the people I played against had been playing since they could pick up a racket). In hopes of doing well on my high school team, I practiced relentlessly, and by the time I was a senior I was actually up to playing #1 singles on occasion...although I mostly lost.

Despite all my practice, I just didn't have the consistency and the fundamentals that my opponents had, turns out it isn't something that you can learn overnight.

Another reason for my shortcomings during my storied high school tennis career was that my strategy was all wrong at times (most of the time).

When I started playing singles, I really wanted to have a good serve. One of those serves that people feared, that would give me a lot of "free points"...a weapon.

I would go out onto an empty tennis court at night and just pound away serves for hours in hopes that it would be so consistently powerful that I could win by shear intimidation.

It never seemed to matter how many bombs I hit during my practice sessions, when it came time to play a match, all my powerful first serves would not be able to find the service box, and I was left with throwing in weak kick serves to start the point. Not a winning strategy.

Looking back, the problem wasn't all the fault of my mechanics. Sure, they could have been improved, but I could have definitely done better with the talent I had if I had just understood the principle of the importance of the first serve.

If you are unfamiliar with tennis, each point starts out with a serve, and the server gets two chances to hit the ball "in", else he/she loses the point. The fact that you have two chances adds an element of strategy to the game.

At the amateur level of tennis, most people make the mistake I did: they go for too much on their first serve.

On pretty much every single first serve I hit, I was swinging for the fences (metaphorically speaking). I wanted every first serve to be an ace (where the opponent can't even get their racket on the ball).

The problem with this strategy is that going for aces on every first serve is a very low percentage play. Sure, you may get one every now and then, but the majority are going to go out of play, and you are left with a more conservative second serve.

If you look at the history of great tennis servers, you will no doubt come across Pete Sampras. He dominated tennis in the '90s with his powerful serve-and-volley playing style. 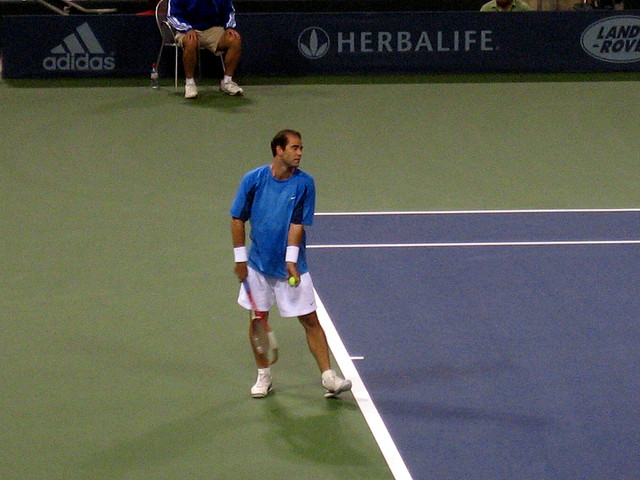 If you look at Pete's average serve speeds, they aren't too different from modern great Roger Federer, but they aren't nearly as fast as former American standout Andy Roddick. Pete's average first serve speed hovered around the 115-120 mph mark, and Andy's was about 10 mph faster. Now, Roddick was known for having a very potent serve, but he would frequently lose to Roger Federer, and didn't achieve nearly the same career success as either Federer or Sampras.

Why? Well, of course you could make the case that Pete and Roger are better all-around players than Andy, but they also were better at using their serve as a strategic weapon.

You see, even though Pete had the ability to throw serves in above 130 mph, he wouldn't do it every time. He would throttle back just a little and go for higher percentage serves that were directed well, and not rely on raw power.

This strategy serves several purposes. First, you get a higher percentage of first serves in play, and even a throttled-back first serve is better than your average second-serve. Second, you conserve energy, saving it for those times you really need it. Thirdly, you keep your opponent off-guard. If they get "grooved" to you throwing in serves at 120 mph, and start to think "all right, I've got this figured out" and you throw them one at 130 mph, they won't know what to think anymore. It's like in The Princess Bride when Inigo Montoya reveals during a sword-fight that he is not left-handed. When in competition, it's always good to hold back a little, just so that you have an extra gear for when you really need it.

Now, I know the sentiment of "Give it your 80%" goes against everything you were ever told on every little league sports team you played for, but it is the right way to go, in my humble opinion.

What "give it your 80%" does NOT mean is "slack off." When I say "80%", I mean 80% of your abilities, but not 80% of your effort. There is a difference between purposely holding yourself back and not being completely in the game mentally.

The key to success is practicing so that your 80% is better than everyone's 100%. It is also about being disciplined to not go full throttle at the first sign of animosity. So your opponent returned one of your serves with a winner? Applaud them. Don't automatically reach for the bag of tricks. If they start to make a habit of it, then it's time to ramp up your game.

How Can You Use This in Life?

This of course goes far beyond the realm of sports. If you feel that your life is constantly overwhelming, then it may be time to cut back a little. See about reducing your extra-curricular activities, see about outsourcing your life (or at least parts of it), or maybe even try to lighten your workload on the job or in the classroom.

On the other hand, if you feel perpetually bored, then you should think about maybe adding some activities. Of course, if you can exert yourself at 50% capacity and still accomplish all your goals, then that's great for you. But even then, think about that extra untapped potential that you (and the world) are missing out on!

Just like in sports, things in life take practice in order to achieve those goals you set for yourself. Practice is really the key to improving your 80%. If you are giving everything your all, and still fall short, then you know that you need to practice more. But don't practice to the point where you can accomplish things when giving them your 100%, practice even harder so that you can accomplish things when you give them your 80%!

When you think about it that way, the concept of 80% is in fact the opposite of slacking off, it really implies that you need to work harder in order to make your mediocre better than everyone else's best!

The key, though, is that you don't always want to be exerting yourself at full capacity. You don't always rev your car up to the redline, so don't always be revving yourself up either. Working at 100% capacity isn't sustainable. It will bring short term gains but long term losses. 80% (or something like that) is a nice number to shoot for. You can still accomplish a lot, but last a much longer in the process.

Which brings me to a lyric from the Rush song "Marathon":

You can do a lot in a lifetime
If you don't burn out too fast
You can make the most of the distance
First you need endurance
First you've got to last...

So get out there kids, and give it your 80%! Let's hope it is still better than the other team...

2 thoughts on “Life Lessons I Learned from Tennis: "Give it Your 80%"”