This is one of them.

On Saturday I made a goal: that I was going to attempt to cook shrimp gumbo. If you've never had gumbo before, then you need to. It's a spicy Cajun (or Creole? I don't really know the difference) stew that basically takes the flavor knob up to 11. Like many dishes with origins in a very specific culture, gumbo is made with a variety of different ingredients (no two gumbo recipes are exactly the same) and people from that culture tend to be very particular about which ingredients are "right" and "wrong". While the dish originated as basically a way to cook whatever meats/veggies you had lying around, there are of course fierce arguments over things like "okra or filé?", "tomatoes or no?", "rice or potato salad?".

The basic gumbo algorithm is as follows: you make a roux (more on this later), cook the "holy trinity" (onions, peppers, celery) in the roux, add a bunch of liquid (usually relating to your main ingredient; since I made shrimp gumbo, I used homemade shrimp stock), add a bunch of spices and your main meat ingredients (unless you are using seafood, add that at the end so it doesn't get too tough), and finally simmer for a long time. Simple, right?

While the whole process is time consuming, I had an entire Saturday to kill, so time was no concern. My plan was to follow this recipe from Art of Manliness, because it reminded me pretty well of a gumbo at a restaurant back home that was really good.

When it comes to gumbos, the first step is the most important, and also the most treacherous. The roux is the foundation of the entire dish, so if the roux is bad, the dish will be bad as well. To make a roux, you combine equal parts fat and flour, and cook until it reaches a deep red/brown color (known as a brick roux). The catch? If you go past this stage, then the roux starts to burn, and if you burn a roux there is no resurrecting it, you just have to throw it out.

The method usually taught for a roux is to whisk it constantly over low to medium heat until it gets dark enough, but this can take up to 45 minutes (of constant whisking) and if you burn it, then all the effort is wasted. BUT there is another way, which I first learned about from watching Good Eats with Alton Brown, which is to bake the roux. Baking is a more gentle heat, so the risk of burning is greatly reduced. Since this was my first time I decided to play it safe and do the baking method. It takes longer, but you can do other stuff while it's baking so it's less effort.

You can imagine my devastation when it burned anyway.

Now, I'm not entirely sure how this happened. It could have been partly due to the fact that I browned the Andouille sausage in the dutch oven first (thinking this was a great idea to use some of the sausage fat as part of the roux). It could have also been that, because I didn't have enough vegetable oil, I used butter instead (which I thought would be okay, but I think it works better if you use clarified butter for this).

In any case, the roux started out just fine in the oven, it gave off a really pleasant smell that nicely counteracted the shrimp smell from my shrimp stock that was cooking on the stove. But something went wrong, even though I checked the roux every 30 minutes (total cooking time is about 1.5 hours), at about the one hour mark it started smelling funny, and little black specs appeared in the otherwise homogeneous mixture. This worried me, since I had read that black specs in your roux were the sign of a burnt roux, which meant it was game over. But I was also wondering if they were just black specs from the fond left over from the cooked sausage. I decided to keep going until the 1.5 hour mark, thinking maybe it would get better (because I'm sometimes stupidly optimistic).

I was left in a predicament, because I had already invested about 2 hours into this recipe, it was 3 in the afternoon, and I had a goal to cook it for 3 hours and have it finished before the Falcons game started (Side note: I feel so dirty watching NFL games on a Saturday, it's like I'm cheating on College Football). Worse yet, I would have to go to the store to get more vegetable oil since I was fresh out.

I thus came to the painful conclusion that I was going to give up on this roux and start over. I went to the store, got some oil, cleaned all the roux bits out of my dutch oven, mixed the oil and flour, and tossed it in the oven...again. This time, it didn't burn, and I was left with a beautiful brick roux that ignited the rest of my gumbo.

Finally, at nearly 10 O'Clock at night, 9 hours after I started the endeavor, my gumbo was finished, and I had a late dinner. It turned out really well, a lot spicier than I was expecting, which was weird because I didn't think I added that much spice, but delicious nonetheless. I have no idea how it would have tasted if I had gone with the original roux, but probably not as good. 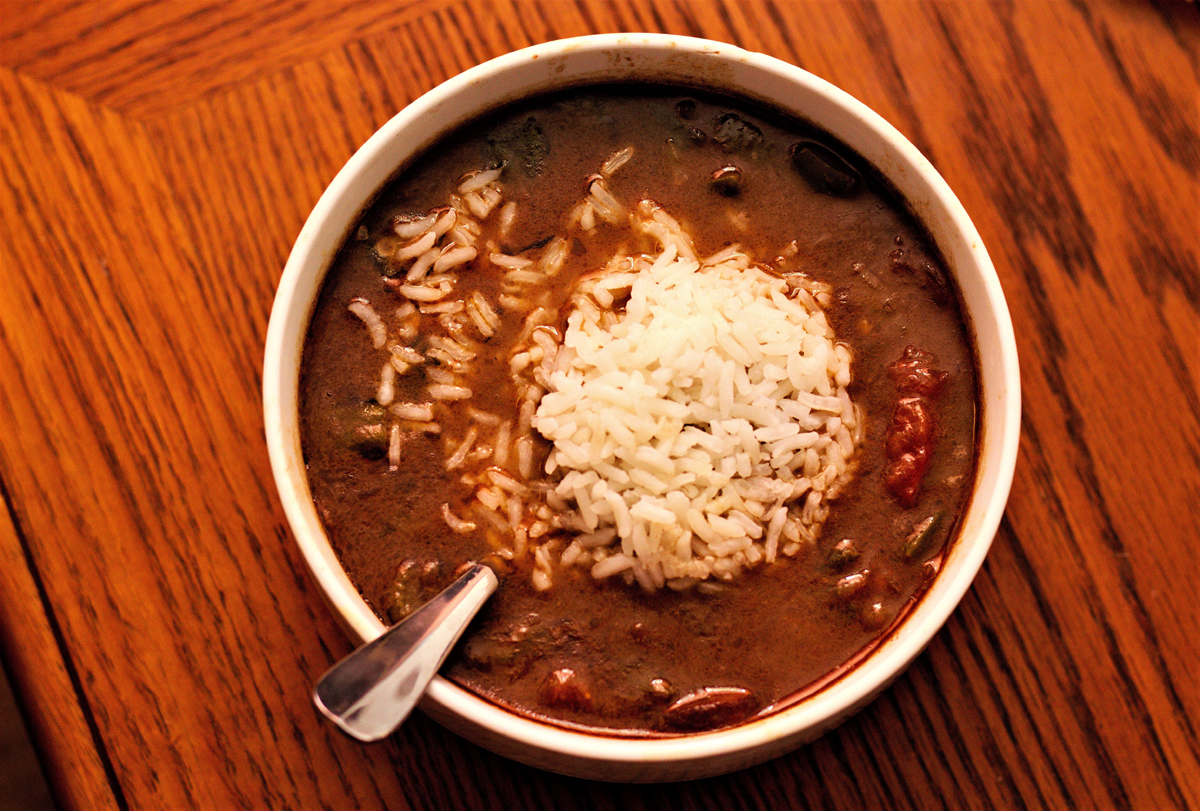 Gumbo is not the most photogenic food, but hot damn is it packed with flavor!

What's the point of this story? Well, you'll often hear stories of successful people who overcame adversity and kept going when the logical thing to do would be to quit. But not all adversity is created equal. Sometimes you have to keep going because you are on the right path, but it may just not look like the right path. Other times, you need to stop and try a different path, because the one you are on will only lead to ruin.

If your roux is burnt, then no amount of enthusiasm or confidence or creativity will be able to save your gumbo. If the foundation is cracked, the house won't stand, no matter how well the house is built. For every one successful person that pressed on in spite of adversity, there are probably a thousand who also pressed on in spite of adversity, but they got nowhere because they were on the wrong path.

So the next time you find yourself stuck on something, whether it be a job task or a business venture, ask yourself "is my roux burnt?" "If this worth pursuing, or do I need to cut my losses?" Don't get me wrong, giving up is probably more painful than pressing on, especially if you've invested a lot of time or money into something. But if your roux is burnt, then a temporary setback is a hell of a lot better than a permanent failure.

Obstacles are to be expected, and some rocky and dangerous paths lead to the promised land, while others lead off a cliff. Choose wisely.