Back in the day, popular music was full of these things called "bands" that would usually consist of a singer, guitarist(s), bassist, and drummer, with maybe a keyboardist or sax player in some cases.

The singer had obvious glory, people naturally sing along to songs, so your singer was usually the charismatic front-man for the band. The guitarist would usually bust out some face melting solos every song, so they had their moment in the spotlight as well. The drums are the loudest instrument and have a sound much different than the others, so the drummer will of course be noticed. Plus, everyone likes to tap their foot to the beat of the drums.

Probably the least desirable of these positions was the bassist. If you listen to a song on a less than quality audio system, the bass probably won't come through very well. It is also a more or less rhythmic instrument, so you don't hear too many face-melting bass solos. It's just kind of there, in the background, doing its thing. 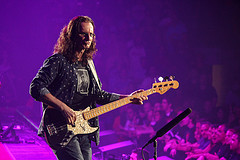 A major problem, if you've ever tried to start a band yourself, is finding a good bassist. No one really wants to be the bassist, so most of the time it ends up being the least good guitarist who begrudgingly takes on the bass duties. If you ever do find someone who actually enjoys playing bass and strives to be the best bassist he/she can be, then hold onto them, they don't come around often.

Even though no one ever seems to want to be the bassist, it is nonetheless a crucial component in any band. Very few bands don't have a bassist, and you can definitely tell the difference in those that don't. If you have ever been to a rock concert, you will undoubtedly notice the bass, as you can most of the time feel it better than hear it. The importance of the bass is that it fills the low end of the song, and without it the song feels very empty.

Not Everyone Gets to be the Lead Singer

I went on that musical introduction to set the scene for a life metaphor of the bassist. You see, bassists exist far beyond the stage, in every walk of life. They are the people who do their job, don't get a whole lot of recognition, and help the world keep turning.

I think a problem my generation is seeing is that no one wants to take on bassist-like duties. We were all brought up with parents and teachers telling us that we "shouldn't settle" and should strive to be the best. Of course this is what parents and teachers probably should be saying, but the message might have gotten through to us just a bit too much.

We now live in a world where everyone wants to be the singer or the guitarist, and no one wants to "settle" for the bass. The thing is, not everyone can be the guitarist or singer. If you've ever read Brave New World (if not, you should), then you'll recall the Cypress Experiment. It was basically a social experiment done in the fictional dystopian universe of the book in which a civilization was constructed of only "alphas," i.e. people who were genetically made to be leaders.

The book explains that the Cypress Experiment was a massive failure. When people who were literally natural born leaders were all put on an island together, chaos ensued. Everyone wanted to be the leader, so no one wanted to be a follower. No one wanted to be a garbageman, plumber, etc. The society eventually collapsed due to indecision created by too much authority.

We are all on this planet together, and thus we need to work together effectively. Most countries today exhibit some form of a capitalist economy, and capitalism relies on a division of labor. If everyone does a different job, and they all do it well, then we can gain much more in the form of goods and services than if we all just did our own thing. Of course, not all of those jobs are glamorous.

Sure, we would all like to be the visionary leader Steve Jobs, but all of the neat things that Steve Jobs "did" wouldn't have happened without a massive team of programmers, engineers, marketers, lawyers, accountants, and yes, garbage men. The reason for Steve Jobs's success (and the success of any leader) lies in the fact that their teams were all being the best that they could be (or, at least pretty good) at their jobs.

I know it's hard to do a job that you feel isn't recognized, but just remember that it's not about recognition. You are probably more important than you realize. The real heroes in this world aren't the famous people you see on TV, they are the people who go do their job every day for the good of the rest of the world. They are the working men who put in long hours and come home to their families, they are the single moms who work all day and go to school at night for the sake of their children.

Maybe you aren't having such good luck finding the job you want. This might be the world telling you that the band you want to be in already has a lead singer, so maybe think about learning to play bass and try again.

You can still be the hero, maybe not the hero that Gotham needed, but the hero it deserved.