With every new year comes a period lasting anywhere from a few days to a few months where I write the previous year and have to scribble it out. But it also brings with it the sad end of the college football season, culminated with several weeks of nonstop bowl action. 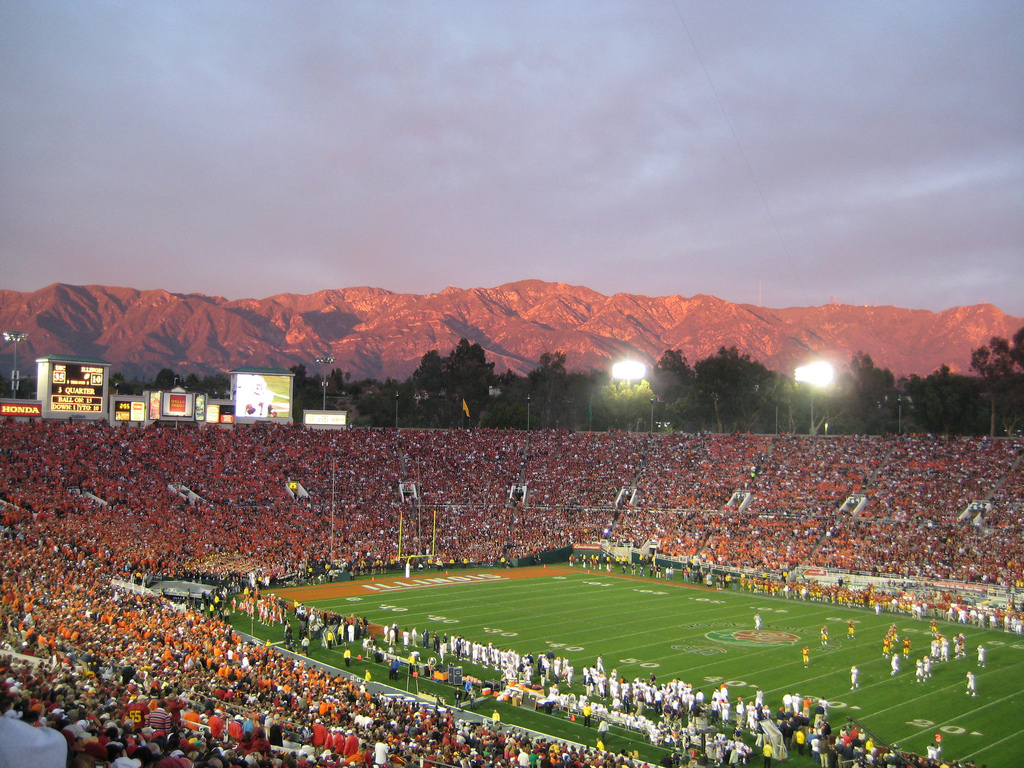 I love bowl season, partly because that means it's around Christmas, which is a fun time (and a break from work), but also because bowl games can just be so darn exciting! After a season of old rivalries and patsy opponents, bowl season gives us something new: inter-conference matchups between teams who rarely meet, or are meeting for the very first time.

This inevitably causes the dreaded conference wars in college football, an age-old tradition in which teams within a conference briefly set aside their differences to push a common agenda: telling the rest of the nation that their conference is harder than yours.

While the casual observer may see this as a childish sign of machismo, the structure of college football puts quite a bit of weight on strength of schedule. Since teams play mostly other teams within their conference during the regular season, if the CFP committee thinks your conference is weak, they won't invite you to the big party, and you have to drink your sorrows away at the Birmingham Bowl.

It is thus natural for sports commentators to look at each conference's bowl record at the end of bowl season and draw conclusions. While it doesn't really make any difference for this season (as the playoff teams are already chosen), it will undoubtedly play into the minds of the committee for the next season. Now, this shouldn't be the case, considering each season is independent, and the results of the last season shouldn't make a difference on the next, but it probably matters at least a little bit.

I'm here to say that you really can't put too much weight on conference bowl records, for a variety of different reasons.

The System Is Rigged!

Well, by design, bowl matchups are supposed to be competitive. Sponsors spend a great deal of money on bowl games, so they want people to watch (mostly on TV, as every bowl game is nationally televised). Since most bowl games have conference tie-ins (Outback bowl is SEC vs. Big 10, for example), you don't always get perfectly even matchups with respect to official rankings.

But let's pretend for a second that all bowl matchups were perfectly even, i.e. every team has a 50% chance to win (a "toss-up"). If a conference has 10 teams in bowls, how many should win?

The easy answer is 5, which is found by multiplying the probability (50%) with the number of samples (10). The more thorough answer looks like this: 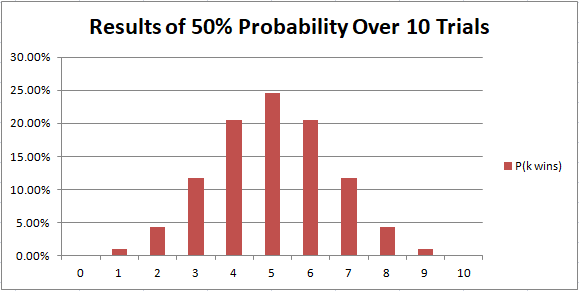 The above chart shows the probability of winning k games given a 50% probability of winning a single game across 10 total games played. Think of it another way: if you flip a coin 10 times, how many heads do you get? As you can see, the distribution peaks at 5 (the expected value), but that doesn't mean you'll get 5 every time. In fact, you only have a 25% chance (1 in 4) of getting 5. There is still a pretty decent likelihood that you will get 4 or 6, and possibly even 3 or 7. The odds of getting less than 3 or more than 7 are pretty low, though.

What does this mean for our bowl record predictions by conference?

For the most recent bowl season (2017), we have conference records as follows:

The final column is the probability of the conference getting exactly the number of wins they did (assuming a 50% probability of winning each game) added to the probabilities of them getting one more or one less win, since this falls within one standard deviation.

For the most part, the conferences had records that lined up fairly well with the binomial distribution, but there are two obvious outliers: the Big Ten and the Pac-12, who had just one loss and one win, respectively (with both playing eight games).

With only a 14.45% chance of either conference getting their number of wins (plus or minus 1), it's highly unlikely that the Big 10 and Pac-12 teams were matched evenly in their bowl games. Does this mean that the Big Ten is a dominant conference and the Pac-12 is weak? Not really, it just means that the Big Ten was stronger than bowl organizers thought they were, and the Pac-12 was weaker. I'm sure we could dive into each game played by the conferences and analyze the matchup and the expected vs. actual outcome, but that's a lot of work and I'm tired.

Aside from low sample sizes and imperfect matchups, there are a few other reasons bowl records by conference should always be taken with a grain of salt:

So, it's fun to watch bowls and pick teams to root for based on little (if any) logical justification, but you should be careful before making grand assumptions about each conference based purely on their bowl record.